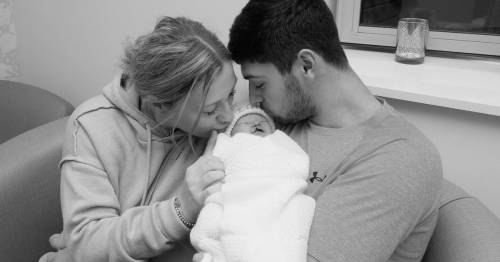 A new mum has shared her heartbreak after her baby girl passed away in her arms as she finally got to hold her properly.

Megan Holmes, 22, was dealt a devastating blow when her private gender reveal scan discovered her unborn daughter only had a potentially fatal condition with a 50 per cent chance of survival.

The expecting mum and partner Sean Simmons, 23, were told that their unborn daughter Elsie had congenital diaphragmatic hernia (CDH) which causes organs like the stomach, bowel and liver to develop in the chest, the LiverpoolEcho reported.

But despite Elsie's incredible strength during the birth on December 22 and an "amazing" first three days, Elsie took a turn for the worst and passed away in her mum's arms on January 3 at Liverpool Women's Hospital.

Megan said: "We had made a private scan at 16 weeks to find out the sex of our baby, but the CDH was picked up.

"Because it is private, they do not diagnose you, so we went to the NHS and were told it was CDH, which is really rare.

"We were told it was 50/50 and I had to go for check ups everyday and scans twice a week to make sure Elsie was OK."

Megan was due to be induced but went into labour naturally on December 20.

Although CDH can vary in severity, it was not realised how serious Elsie's condition was until she was born, and the couple only got to see their little girl for less than a minute after she was born before staff had to whisk her away for treatment.

Megan said: "There were about nine or 10 people in the room because we knew she would need to go straight on to a ventilator.

"She coped so well during labour, but did become a bit distressed towards the end. She was born with a cleft lip which we did not know about and that made it hard to get the tube in to help her breathe.

"When the tube was finally in, we were able to hold her for about 30 seconds before she was taken to the intensive care unit and then we had to wait three and a half hours before we could see her.

"The pair of us were just so anxious – we just stood there crying after she was taken away. You don't know what to do, you feel so helpless."

Megan and Sean spent Christmas in the hospital holding Elsie's hand: "It was lovely to be with her but to be honest, it didn't even feel like Christmas – the days just passed me by."

Despite the fact the condition had seen Elsie's bowel prevent the growth of her left lung, she began breathing on her own and was already developing her own personality.

Megan said: ""She was very fussy. She had to be in a certain position, she was very particular.

"She was doing amazing for three days and we were put up in one of the hospital's parent rooms.

"One morning at 6am we had a big bang on the door – Elsie had taken a turn and just passed away. The staff did everything they could.

"We were finally able to hold her properly and she passed away in our arms."

Elsie's funeral will be held next week, but her parents have already set about fundraising for the Liverpool Women's and Clare House Hospice in her honour and to put something good back into the world.

Megan said: "Raising money for charity has helped us cope so much – it has kept us busy and in a way, kept Elsie with us.

"Our families and friends have been amazing supporting us and I want to talk about Elsie, I want others to know it is OK to talk about their babies too, it has helped us remember her."

Megan is doing a range of events over the coming months to raise money and awareness, you can donate via her GoFundMe page and follow her journey on her Instagram " Elsie's everlasting love ".