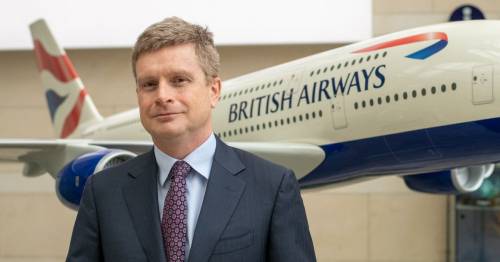 A summer of travel chaos is looming as British Airways staff voted to go on strike in a furious row over pay.

Check-in workers at Heathrow backed walkouts after executives refused to reinstate a 10% wage cut brought in during Covid, despite claims managers got theirs back.

The GMB said: “Holidaymakers face massive disruption thanks to the ­pig-headedness of British Airways.”

Fears of a summer of discontent have deepened after angry British Airways staff became the latest to back industrial action.

Hundreds of check-in workers at Heathrow airport voted by an ­overwhelming 95% to walk out in a row over pay – sparking the prospect of holiday chaos for millions of Brits.

And the dispute could escalate as 16,000 other BA staff are ­threatening to strike. It comes after Britain was ­crippled by a second day of train strikes.

The BA row goes back to a 10% pay cut all workers accepted early in the pandemic to help slash costs.

Led by £848,000-a-year boss Sean Doyle, the firm has not reversed the cut, amid claims it was reinstated for managers. BA used “ fire and rehire” to axe thousands of jobs in Covid.

The BA staff are represented by the GMB and Unite. The GMB said: “All our members are asking for, and these are primarily low-paid women, is for BA to reinstate the 10% taken from them during the pandemic.”

GMB national officer Nadine Houghton warned: “I would imagine there will be action during the summer holidays.”

The union said dates for industrial action would be confirmed in the coming days. But asked if she would book a flight in late July, August or early September, Ms Houghton replied: “Not at this stage.” She added: “With grim predictability, ­holidaymakers face massive ­disruption thanks to the ­pig-headedness of British Airways. Our members need to be reinstated the 10% they had stolen from them last year with full back pay and the 10% bonus which other colleagues have been paid.

“GMB members at Heathrow have suffered untold abuse as they deal with the travel chaos caused by staff shortages and IT failures. At the same time, they’ve had their pay slashed during BA’s callous fire-and-rehire policy.

“It’s not too late to save the summer holidays. Other BA workers have had their pay cuts reversed, do the same for ground and check-in staff and this action can be nipped in the bud.”

Thousands of further BA staff are ­threatening to strike
(

Some staff were offered a different arrangement, which included lump sum payments equivalent to the cut but it meant their salary didn’t go back up permanently.

The GMB also pointed out that, apart from manager wages returning to ­pre-pandemic levels, the chief ­executive of BA’s parent company IAG, Luis Gallego, is in line for a £4.9million payout this year if he hits targets.

Unite said it was giving the airline a “short window of opportunity” to restore the 10% pay cut.

The union’s national officer for ­aviation Oliver Richardson added: “The problems British Airways is facing are entirely of its own making. It brutally cut jobs and pay during the pandemic.”

The view of Jason Beattie, The Daily Mirror's Head of Politics

BRITISH Airways used to boast it was the world’s favourite airline.

Now it risks gaining a reputation as the world’s worst employer.

The pandemic was a terrible time for the aviation industry.

British Airways did not regard Covid as a crisis though, more as an opportunity: an opportunity to lay off thousands of staff and employ those it retained on worse pay and conditions.

While the rest of the country rallied together, clapped for carers and helped their neighbours, BA’s bosses looked out only for themselves.

They have continued to do so since travel restrictions were lifted.

Pay reductions imposed on all staff during the pandemic have been ended for managers only, not for workers.

Faced with such a blatant injustice, the unions have turned to the one bargaining measure that could force BA to change its mind: strike action. After the recent chaos witnessed at Britain’s airports, the last thing passengers will want is further disruption.

If they want to vent their anger, they should do so at airline management and at the Government.

Transport Secretary Grant Shapps needs to stop being a plane-spotter at the perimeter fence and to start trying to broker an agreement. For as long as he sits on the sidelines, managers will think they have his blessing to go to war with the unions.

BA said: “We’re extremely ­disappointed with the vote and that the unions have chosen to take this course of action. Despite the ­challenging ­environment and losses of more than £4billion, we made an offer of a 10% payment which was accepted by the majority of other colleagues.

“We are fully committed to work together to find a solution, because to deliver for our customers and rebuild our business we have to work as a team.

“We will keep our customers updated as the situation evolves.”

Transport Secretary Grant Shapps has been accused of doing nothing to end the BA dispute, just as he was slammed for his ­inaction over the airport chaos on the Jubilee holiday. The strike threat comes against a ­backdrop of wider unrest among workers in both the private and public sector, with teachers, traffic wardens, BT and postal staff all demanding rises.

Boris Johnson again dug his heels in over public pay, despite ­inflation at a 40-year high of 9.1% – claiming higher wages will push it up even further.

But he came under further pressure to improve offers after a flurry of pay deals ­elsewhere.

Merseyrail agreed a 7.1% rise with the TSSA union, ­Docklands Light Railway workers in London were offered 9% and Eurostar staff 8%. Just one in five trains across the country ran yesterday and ­travellers are bracing themselves for more travel misery on Saturday with a third strike.

Negotiations are due to continue today. RMT general secretary Mick Lynch warned the union would “continue its industrial campaign until a negotiated settlement is reached”.

No10 yesterday announced controversial plans to change the law to allow firms to take on skilled agency workers to plug gaps during strikes.

But Neil Carberry, chief executive of the Recruitment & Employment Confederation, said it was being made with no consultation with agencies.

He added: “It is not something ­agencies want, and will not achieve the goals the Government claims.”

Previous : People are giving up their beloved pets because they can’t afford to feed them
Next : Boris Johnson faces Tory pressure to focus on southern heartlands after by-election test