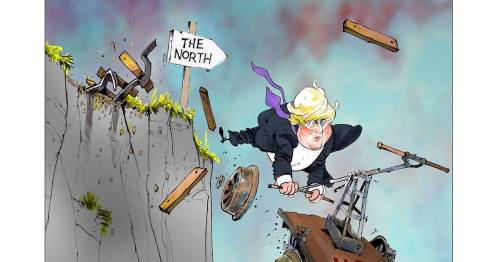 Earlier this week, Boris Johnson described his handling of the sleaze affair as a car crash. How unlucky do you have to be to follow that up with a derailment?

It is incredible, it really is, to see the amount of spin put on this one.

For a long time now we’ve known that the HS2 eastern leg was going to be scrapped.

I spoke to someone earlier in the year and the explanation was quite simple: they’ve run out of money.

Now we’re hearing that’s not the case at all. This new scheme is going to be better.

It’s not though, is it? I was quite looking forward to being able to get back to Leeds about 30 minutes earlier. Another pint in Whitelock’s. That dream, ladies and gentlemen, is dashed.

But in some ways, that’s the least of the problem. Because connecting Leeds to London is fair enough but the ­priority has to be a proper transport network in the north

It’s hard for people in London to understand sometimes. The north is big. Many people live there. There are great cities, industry, commuters, ­people who rely on public transport.

I don’t know why that’s so hard to understand.

But I suppose that is the nature of the way the north is treated. This is the latest in a long line of slaps in the face. Once, years ago, I was talking to a bloke who had worked on a regeneration scheme in the Midlands.

It was one of those – similar to HS2 – that had got halfway done (i.e. they had knocked half the houses down) then the Tories were elected and Whitehall pulled the plug.

I had gone to visit it and it was quite something. Rows of terraced houses all boarded up and shuttered and the roofs gone with one man, who couldn’t escape before the money ran out, still living in the middle of it. Surreal.

Anyways, the bloke who was showing me round said that he had invited the civil servant in charge of the project up for a look round a couple of weeks before I got there.

“This man,” said the guide, “was one of the top ones. Sharp suit, think he had some sort of honour, few letters after his name – posh, you know?

“We took him round and he was really quiet, but I had a look at him in the car and he was crying. Really shaken.

“And I spoke to him after and he said, ‘I didn’t realise what we were doing’.” That’s the thing. That disconnect
between Whitehall and the north of England is a real, concrete problem.

HS2 is the latest in a long line. What they promised wasn’t great. What they’ve delivered is not good.

Maybe this one will be the one that really cuts through.

Andy Burnham is becoming more and more active, and those Tory MPs who were already unhappy with the PM are even less happy now.

I think I mentioned last week the sharks were circling. Now I get the sense the time is upon us that one of them is going to have a bite.

Previous : ‘We need a leader who shows us the right thing to do and instead we have Boris Johnson’ – Voice of the Mirror
Next : Queen ‘upset’ as royals ‘threaten BBC boycott’ over warring William and Harry programme