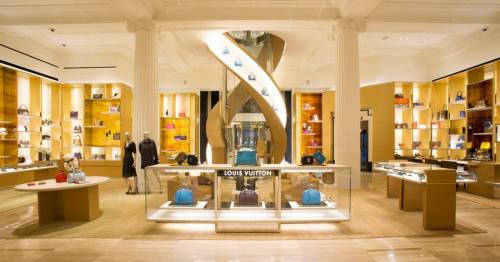 A bungling drunk caused more than £20,000 worth of damage at Selfridges after trying to break into a Louis Vuitton display.

Mark Mills, 42, tried to smash through the window display using an axe at the world famous department store in Manchester city centre.

But the would-be-thief was caught by police shortly after his botched efforts and left empty handed.

At the time he was binging on up to nine litres of cider a day, but he has since been released from prison after vowing to tackle his alcoholism.

Manchester Crown Court heard that Mills and another unknown man were seen attempting to smash a window at the store at around 3.30am on March 13.

They tried to force their way into the Louis Vuitton display with Mills wielding the axe when police arrived.

The pair had managed to create a hole in the window, and the knife had been used to make it larger so they could reach through it.

During the break in, two pairs of trainers worth £875 each were damaged while £20,000 worth of damage was made to the window.

Mills told police that he'd found the axe "at the back of a canal".

Thomas McKail, defending, said Mills sipped on his first alcoholic drink at the tender age of 13 and had suffered from alcoholism since his 20s.

He would turn to the bottle at times of low mood and emotional problems, it was said.

Mills started drinking again after the death of his grandmother following a period of abstinence, Mr McKail said.

The barrister appealed for him to be spared from spending more time in jail, after being remanded in custody since the incident.

He argued that Mills was able to tackle his drink problem in the past and is now motivated to try again.

Sentencing, Judge Timothy Smith said: "The loss to Selfridges, even for a store of that size and profitability, was significant."

But he said the scheme was "almost bound to fail".

Mr Smith said that he was satisfied with Mills' motivation to change and sentenced him to 14 months in prison, suspended for two years.

He was also ordered to carry out a six month alcohol treatment program, 175 hours of unpaid work and 20 rehabilitation activity requirement days.

Previous : One year on from football’s social media blackout – what’s changed?
Next : Disabled woman ‘humiliated’ after Wetherspoons refuse entry because of assistance dog