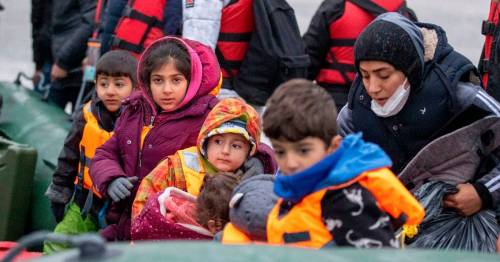 I started my career as an excited twenty-something at the Home Office in 2002, having worked for the Mayor of London where my role had become too political. I thought applying to the Home Office would be less political, less contentious, more organised and more impactful. But little did I know.

I joined the Immigration and Nationality Directorate and after signing the Official Secrets Act, I settled into the MP and Ministerial Correspondence division.

This was a dynamic unit which gave me a good ground for future work and challenges ahead. This ranged from visa to passports, from asylum to human rights, from international students to the UK labour market.

What I learned is that asylum seekers fleeing certain countries are never returned, due mainly to British economic interest in that country, the type of political regime, or because returning an asylum seeker would cause embarrassment to the sovereign of that country, no matter questionable their human rights practices.

Asylum seekers often talk about mining in their villages and the pollution it brings to the water, the babies born with deformities and the appalling working conditions their partners have to endure. Their government may have no financial muscle to challenge the foreign-owned companies and there are no labour laws. The over-mining helps contributes to the climate crisis, and when minerals and resources dry up, Western companies just pack their bags and leave. We know of one famous prime minster whose son was implicated in a coup in an African country – he simply picked up his bags and boarded a plane.

Then there is terrorism. Asylum seekers were often extremely nervous, traumatised and bordering on the psychotic during my interviews with them (we had a panic button under the desk to call for help if needed), recalling the horrors of their journeys and their homes and community being burnt to the ground by insurgents. Sometimes even their child’s school, despite them not being involved in any religious or political movement.

Asylum seekers can also be political prisoners or prisoners of conscience – simply for expressing a view. You can be tortured, raped, murdered, even if your family member has a political view and not you. According to the International Organisation for Migration (who had an office in my building and acted as a critical friend to the Home Office) since 2014, over 20,000 asylum seekers and migrants have died or disappeared in the Mediterranean Sea alone.

Migrants launching an inflatable boat and setting off for the UK at Wimereux, France on November 24
(

Why do they come?

Asylum seekers often say the UK has a long tradition of welcoming people fleeing dangerous or totalitarian states. They say they believe their rights will be respected – whether they have £100,000 or £1 in the bank. That there is a court system, judiciary, and a trial – rather than an execution. They admire our fight for equality, fairness and social justice. Above all, asylum seekers say they believe they will have dignity.

There is a distinction between asylum seekers and refugees. An asylum seeker is just that – anyone fleeing persecution or death and seeking safety in another country. A refugee is someone who has actually been granted refugee status – meaning their claim has been fully assessed, usually via medical reports and reports in their country of origin and found to be genuine.

Refugees are then granted asylum or humanitarian protection. At times this can be for a limited time to see whether the situation in their home country improves. So there is no automatic “open door” of asylum seekers as is the common perception. If a claim fails, asylum seekers are returned to Third Countries where we have an agreement – a safe country they have passed through on their way to the UK. We had a department in the Home Office dedicated to this known as the Third Country Unit. Most European countries are part of this agreement and signatories to the European Convention on Human Rights.

However, since we have left the EU, we cannot return any asylum seeker to a Third Country. Own goal. Our government has signalled that it will also pull out of the ECHR. The UK again will not get the cooperation it seeks, and asylum seekers will not get the protection they deserve. Another own goal.

An important strategy in the asylum crisis was that asylum seekers were able to apply for asylum at any British Embassy or High Commission in their home country with whatever documentation they had or none. Their claim would be assessed by embassy staff and intelligence officials and a decision would be made in a matter of months – not years as it is now today. No one wins in these scenarios.

Not the taxpayer and certainly not the asylum seeker. This was a safe, sensible route and would often negate the contentious issue of an asylum seeker’s age. In its wisdom, the government decided to discontinue that system. Yet another own goal.

The government has imposed hefty fines on lorries crossing the Channel if an asylum seeker is found, and also the airline industry. Checks are now overzealous in these sectors. The only route left for asylum seekers are small unsafe boats – sometimes inflatable dinghies with little protection from the wind and waves.

If a solution isn’t found fast, I fear many more will perish in the English Channel.