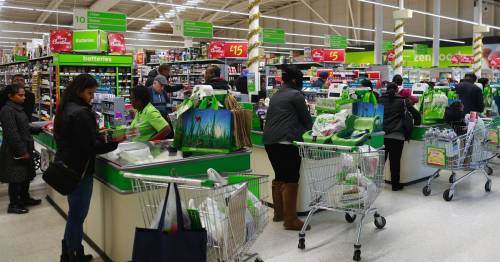 Asda staff secure pay rise after strike threats with workers to get £10.10 an hour

Asda is the latest supermarket to confirm a pay rise for thousands of workers after staff threatened strike action – but how does it compare to other stores?

In an update today, Asda announced the hourly rate for 120,000 shop floor workers will increase to £10.10 per hour from July.

The supermarket says this pay is an additional 60p on top of the National Living Wage, which sets the minimum amount you should be paid based on your age.

The National Living Wage (for those aged 23 and over) is currently £9.50 per hour.

How much do the supermarkets pay their workers?

Asda isn’t the only grocer to confirm a pay increase this year – Tesco, Sainsbury’s and Marks and Spencer have also increased pay for basic rate workers.

The top starting rate pay for shop floor workers outside of London is currently £10.10 – this is being paid by four of the major supermarkets.

Do you work for a supermarket and want to share your experience? Let us know: mirror.money.saving@mirror.co.uk

Here are the latest supermarket pay rates for all the stores that have confirmed new hourly rates for April 2022.

Morrisons hasn't confirmed if any pay rises have been awarded to staff in 2022, but last year its pay started from £10 an hour.

We're checking if this has gone up to reflect the cost of living crisis and we'll update this article when we get a response.

Iceland was last year paying its shop floor workers at least the National Living Wage, which has just increased from £8.91 to £9.50.

We've asked Iceland if it has increased this pay rate.

Those who work for a supermarket inside the M25 will generally be paid a higher amount than what has been listed above.

For example, Asda told The Mirror that shop workers in London will be paid at least £11.27 an hour, compared to £10.10 outside the capital.

Higher pay for those who work inside the M25 is known as "London weighting" to reflect higher living costs.

Previous : 2,300 Brits forced to take a ferry to get to a bank after island closes last branch
Next : Twin girls, 11, missing from their village home sparking police search and urgent appeal