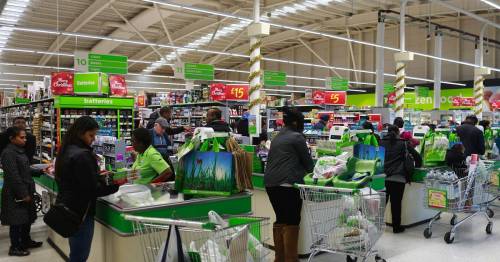 ASDA customers have been forced to ask staff to stop scanning their food mid-checkout as they reach their spending limit.

The supermarket's boss has made a heartbreaking admission about the demands, and says that the same thing is happening with petrol.

New records show that supermarket prices have hit a 13-year high, resulting in shoppers struggling more and more to afford what they want and need.

ASDA's chairman has said that many people are being forced to ask staff to stop scanning mid-checkout when they hit a certain price limit.

Records show that supermarket prices have hit a 13-year high
(

Some people are also heading to self-checkouts to avoid the embarrassment of not being able to pay, the Manchester Evening News reports.

Speaking to the BBC, Lord Stuart Rose described a "massive change" in customers' behaviour and called on the Government to do more to help low income households.

He said: "People are trading back. They are worried about spending.

He added that many people won't remember the inflation of the 1970s and the current rise in prices has come as a shock to many.

He added: "I'm of the generation that remembers what it was like last time. And once [inflation] gets hold, it's quite pernicious."

Britons are set to see their annual grocery bills jump by £380 this year as food price inflation hits a fresh 13-year high, according to new figures.

The latest data from Kantar has revealed that grocery price inflation jumped to 8.3% over the four weeks to June 12 – up from 7% in May and its highest level since April 2009.

The soaring increases in the cost of food and groceries means the average annual shopping bill is now predicted to increase by £380 to £4,960 in 2022 – up by more than another £100 since April alone, Kantar said.

Shoppers are increasingly swapping branded items for cheaper own-label products as they look to manage their budgets, according to the research, says LancsLive.

The average price of a litre of petrol at UK forecourts reached a new high of 189.3p on Tuesday, according to data firm Experian.

The average price of diesel was 197.1p per litre. The rate of inflation rose again in May, remaining at 40-year highs and deepening the squeeze felt by households across the UK, the Office for National Statistics (ONS) has said.

The rate of consumer prices index (CPI) inflation rose from 9% in April to 9.1% in May, the statisticians said.

The increase matches what analysts had expected and pushes the measure to its highest since early 1982, according to ONS estimates.

Previous : ‘Amazing’ dad shot dead in car next to son, 7, on Father’s Day in ‘heinous’ murder
Next : Does Fantastic Beasts: The Secrets of Dumbledore have a post credit scene?