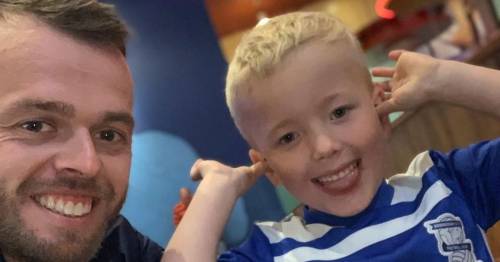 A "pitiless" father told his partner to dig his six-year-old son's grave and "gag him with rope and a sock" the day before the little boy sustained fatal brain injuries, a court has been told.

Thomas Hughes, 29, is accused of subjecting his son Arthur Labinjo Hughes to a "persistent campaign of cruelty" during lockdown, and is currently on trial for his murder.

Little Arthur was found with 125 areas of bruising on his body after he died from unsurvivable brain injuries in June last year, while alone with Hughes' partner Emma Tustin, 32.

In evidence today, text messages from Hughes to Tustin were read to the jury detailing how Hughes said he would deal with Arthur's behaviour.

Prosecutor Jonas Hankin QC told Hughes: "On that day, June 15, you signalled your intentions to cause Arthur serious harm in messages.

"You messaged Emma to 'dig Arthur's grave', 'I'll take his neck off,' 'to gag him with rope and a sock in his mouth', 'kid is getting it when I get back'".

Hughes agreed he had sent the messages.

Mr Hankin quizzed Hughes about further messages on June 16, where he texted, "I'll deal with him, it won't be pretty" and "put him outside, put him out with the rubbish."

Mr Hankin asked: "Did you threaten to take his c*"ting jaw off his shoulders?"

Addressing the jury directly, Hughes said: "The things I have accepted, I am disgusted in.

"No parents should act like I did. I cannot see my son ever again because of this, it is horrible.

"Emma's behaviour was disgusting – she gaslighted an awful lot of people."

Prosecutors accused Hughes of being an "utterly ruthless, unthinking and pitiless" parent, but he denied that, along with a further claim that he "relished in abusing" his child.

Hughes also admitted forcing Arthur to stand for 14 hours a day and applying pressure to his neck using techniques learned from watching videos about police brutality in America.

Jurors were told previously how the youngster was found unresponsive at the couple's home on Cranmore Road, in Solihull.

He had been subjected to a "cruel and systematic" campaign of cruelty which amounted to the "medical definition of child torture", the court was told.

The couple are also accused of depriving Arthur of food and poisoning him with salt.

Police outside a home on Cranmore Road in Shirley, Solihull, West Midlands, where Arthur Labinjo-Hughes, six, was found injured
(

Jurors were told that when he died Arthur was found to have consumed so much salt medics questioned their own machinery.

He agreed that he had subjected Arthur to "forced standing", denying him an ice-cream during a heatwave and depriving him of "adequate amounts of water".

Hughes also admitted he would use "pressure points on Arthur's neck to discipline him" after seeing videos about police brutality in the USA online.

He said he would use these pressure points for "about 10 to 15 seconds" to "help discipline him."

Under cross-examination Mr Hankin asked Hughes: "You demonstrated this on yourself didn't, and even hurt yourself?"

Hughes replied "yes" and when quizzed on how forceful this was on a scale of one to ten Hughes said: "Probably a six or seven"

Mr Hankin asked: "You researched how to inflict pain on your son?"

The court was shown images of Arthur with bruising on his back and Hughes claimed Tustin had "coached" him to say the marks had come from boxing with other children.

When social services came to visit the house, he admitted lying about the pictures.

Hughes denied throughout his cross-examination that he was taking sides, to try and protect Tustin over the well-being of his son.

But when asked whether he valued Tustin's love and attention more than his son's welfare Mr Hughes replied: "Towards the end, probably."

Hughes was also aware that his parents had concerns over Arthur and had rung social services, but Hughes thought this was a "threat on his parenting by his own parents."

On one occasion Hughes tricked Arthur into the car by pretending he was going to visit his grandparents – a place "he had felt safe" – but then never went.

Hughes admitted that this was an evil act "probably on a scale of six or seven out of ten" and it was purely to trick him.

Hughes, said: "All Arthur wanted to do was go back his grandparents, I felt that wasn't the right move. Arthur would get his own way a bit too much there. I did trick him. I never relished it."

When Hughes was asked about the dehydration Arthur had suffered, Hughes admitted to denying him food and water and said he would reject food.

Mr Hankin asked: "He rejected food because it was contaminated with salt, didn't he?"

Hughes replied: "That has been an explanation, yes."

Hughes and Tustin have both pleaded not guilty to murder.