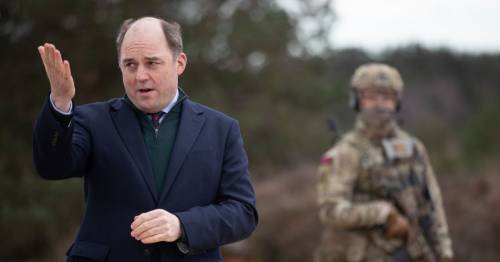 Hundreds of British Army vehicles will return to Germany after the latest Tory U-turn.

The Conservatives had planned to bring all 20,000 UK troops home from Germany by 2020 under the £1.8billion Army Basing programme.

But that plan was shelved amid growing tensions with Russia.

Today it emerged tanks, fighting vehicles and other equipment will go back to the country, with existing numbers of vehicles bolstered.

A NATO base in Sennelager will become a new station for a land regional hub, along with sites in Kenya and Oman.

The bases will mean British soldiers can be ready to deploy quickly “should it be required”, according to Commander Field Army, Lieutenant General Ralph Wooddisse.

He told reporters: “I particularly emphasise Germany, where we are putting a substantial number of our armoured vehicles forward in order to be able to move more quickly should they be required anywhere on the continental land mass.”

British forces have been based in Germany since the end of the Second World War.

Troop numbers were boosted during the Cold War but were cut after the Berlin Wall was torn down in November 1989, signalling the end of the stand-off with Moscow.

Plans for the “Future Soldier” programme were revealed yesterday(THU) in the Commons by Defence Secretary Ben Wallace.

Plans to axe other bases have been scrapped or delayed.

The Army’s regular forces will dwindle to 73,000 troops – despite a previous Tory manifesto pledge to maintain an Army of 82,000 soldiers.

Mr Wallace told MPs restructuring and reorganisation of units will take place in the coming years, with the regular Army standing at 73,000 by 2025.

Shadow Defence Secretary John Healey told the Commons: “By the time of the next election we will have the smallest Army in 300 years.”

Former Scots Guards officer Mr Wallace said that on a recent visit to troops and their equipment, he found it “was entirely the same armoured brigade as I stood amongst in 1991”.

He added: “It really reminded me how far behind our Armed Forces – certainly our Land Forces – have fallen and I was determined that we modernised.

“Yes, that does mean we have fewer soldiers but it also means that we will have an honest Armed Forces – an Armed Forces that does what it says on the side of the tin rather than boasts about having lots of people and actually equipment that is 20 years out of date, which is to some extent what we have had for far too long.

The wide-ranging project announced to Parliament will tackle the “antiquated nature of much of our equipment”, according to Lt Gen Ralph Woodisse.

The Army’s head of strategy, Brigadier John Clark, said the overhaul would make the Army “fit for the future”.

But Mr Wallace admitted the “troubled” Ajax programme for armoured fighting vehicles was “demoralising” for troops due to use them.

The scheme has been hit by delays and complaints about noise and vibration.

Mr Wallace said: “We have to explore what fixes there are for it but as you know it’s a troubled programme and I am pretty determined that we either fix it or are honest about its shortcomings and see what we have to do to mitigate that.”

Meanwhile, part-time troops will fill sandbags and reinforce flood barriers under the shake-up.

“Homeland resilience” will switch from the regular force to the reserve.

“I think there’s a real appetite to do this,” said Lt Gen Wooddisse.

“For more general duties support, I think the Reserve is ready and willing.”

Previous : Sources: Dallas Cowboys WR CeeDee Lamb out Thursday after concussion
Next : Tories refuse to rule out pushing Channel boats back to France despite 27 deaths