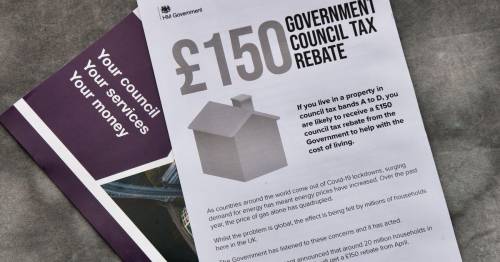 Brits up and down the country will get their £150 council tax rebate paid within a matter of days.

Chancellor Rishi Sunak announced a £9 billion package in February to help families tackle the rise in the cost of living.

Households that fall within council tax categories A to D – roughly 80 per cent of properties – are entitled to the one-off payment from the Government.

But if your home falls into bands E, F, G and H (or I as well, in Wales) you will not be entitled to the automatic payment.

Scottish residents will also be entitled to £150 off if they are in bands A to D – but they'll also qualify if they're currently getting a council tax reduction as well.

According to money-saving expert Martin Lewis, people in these bands struggling to pay their bills may be able to apply for help through a separate £144m pot which local councils can dish out on a discretionary basis.

The £144million will be used to provide support for vulnerable people on low incomes that do not pay council tax, or that pay council tax for properties in Bands E to H.

The exact eligibility criteria for the discretionary funding is being set by each council.

It's understood that around 20 million households will be reimbursed, including 95 per cent of Brits renting property.

The matter of reimbursing residents comes down to the local authority, meaning that the exact payment date varies by area and how your council tax is paid.

Individuals who pay their bill with a monthly direct debit are expected to get their payments before people who use other means.

Non-direct debit residents need to apply for the one-off payment, with some councils now revealing how to do so.

Residents of Sunderland, Leeds and Manchester have already been sent their rebate, with more local authorities set to award theirs this week.

The local authority for North Nothamptonshire aims to begin dishing out payments for direct-debit customers starting from Monday May 9, it says.

North Northamtonshire Council adds it will be in touch with households paying via other methods soon.

The council will be paying in descending order, with band A properties receiving theirs on Monday, band B on Tuesday, C and D on Wednesday and Thursday.

The council will also open applications from other payers from Monday.

People in Braintree who paid council tax using direct debit from April 1 will receive their payment no later than Monday, according to the Sun Online.

Residents paying with a direct debit listed as May 1 will get their payment this month.

Households paying by other means can access the council's online form at an unspecified date later this month.

Previous : Harry and Meghan’s Netflix crew ‘will be stopped if they try to film inside Jubilee’
Next : Lewis Hamilton loses 2kg in one day during Miami GP practice session