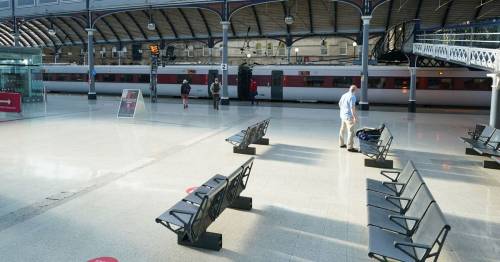 Are the trains running today? Chaos in store for passengers despite no strikes

Thirteen train operators have seen RMT members walk out in a series of train strikes this week.

Signallers, control room staff and train workers are taking part in the strike action after last-ditch talks failed to resolve a dispute over pay, job cuts and working conditions.

The RMT members are taking a break from strike action and returning to work today (June 24), but rail services are not running as normal.

Here’s everything you need to know about how the rail services are operating today.

Train services will still be operating at a reduced capacity today
(

There is no train strike planned today, however, the public have been urged to delay their journeys if possible.

This is because strike action from yesterday is likely to have a knock-on effect on railway services today.

Normally there are 20,000 passenger services a day but this is expected to fall to just 4,500 on strike days.

On non-strike days like today, services are expected to continue to be reduced to between 12,000 and 14,000.

Each walkout by the railway workers is lasting 24 hours and strikes from signallers and train control room staff who would usually have worked overnight last night means that many trains will be late to leave the depots.

This means that lots of services are likely to be running later than usual today and early morning services could face cancellations.

Which rail services are affected today?

Commuters have been advised to source alternative transport
(

Avanti West Coast have suspended ticket sales this week, which includes tickets for today and the other days around the strike action. It's also said that train travel on its services is expected to be affected in the days after the strike.

All services on the Caledonian Sleeper have been cancelled today.

C2C, which provides transport between London and Southend, said it expects "significant disruption" on the days between strike days too.

Transport for London has said that disruption following strikes is "likely" on parts of the Tube, Elizabeth line and London Overground.

Southern railway workers aren't striking, but its services will still face "severe disruption" and it has advised passengers to only travel if "absolutely necessary" today.

CrossCountry services will start later than normal today; it said services have been disrupted because "industrial action also affects staff due to work overnight shifts".

East Midland's railway will be operating a reduced service today, with the first morning trains being "significantly later" than usual.

Northern has some services operating today, but is still advising people not to travel and to make "alternative plans".

ScotRail services will be disrupted by the reopening of signal boxes and this means that it may be "early afternoon before many routes are able to operate as normal".

SouthEastern also has a warning of "severe disruption" today.

TransPennine Express has urged customers to "plan carefully" today because of disruption from yesterday's strikes.

Transport for Wales has advised people to "only travel by rail if essential" today and said its services won't return to normal until June 27.

West Midlands Railway has said it will be operating "a very limited service" between 7:30am and 6:30pm today due to the knock-on impact of strikes.

How can I check if my train is running?

There are 13 train operators affected by the strikes and the impacts of yesterday’s strike action would have hit each of them differently.

It’s highly recommended that you check that your train is still running today before leaving for your journey.

The best way to check whether your train is running is by using the National Rail journey planner.

Alternatively, you can check directly with the rail provider that you are using.

When will the rail strikes end?

The last strike day is set for Saturday June 25 – when rail workers will stage their third 24-hour walkout.

However, like today, Sunday is also expected to face disruption from the impacts of Saturday’s strike action and there are likely to be more delays to rail services.

Services should return to normal on Monday June 27.

However, RMT members could push for further strike action if negotiations aren’t satisfactory.

Previous : Train strike chaos to roll into Friday – what services will run and more questions answered
Next : Yorkshire chair Lord Patel raises past Headingley fears as he opens up on racism storm