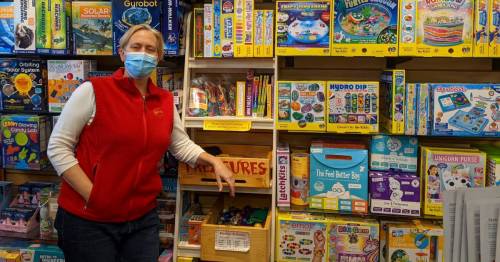 Struggling toy shop owners have resorted to hoarding gifts for Christmas to cope with huge shortages – after receiving just 20 per cent of their orders.

Kim Mitchell, 52, who has owned the independent toy store Boing! for over a decade, said the run up to the festive period is always her busiest time of the year.

But she said this year has proved the most stressful yet with the toy industry experiencing its worst supply chain crisis in recent history.

The knock on effect of vast Covid related issues have meant manufacturers are now unable to keep up with seasonal demand – resulting in a large shortage of stock.

Factory shutdowns and labour shortages throughout the pandemic are said to be responsible for the backlog.

Once toys make it to the United States, only around half of her orders are actually being filled
(

And Kim said its independent toy stores like hers which are being hit the hardest.

The mum of one, tends to buy from smaller manufacturers, which are having to compete with big-box stores for both raw materials and space in shipping containers.

Once toys make it to the United States, her small store is often an afterthought, and only around half of her orders are actually being filled.

Kim, from Boston, United States, said: "The biggest thing is the unpredictability as it makes it really difficult to plan.

"Usually 80-90 per cent of our stock requests are guaranteed for the holiday season, but currently it's more like 20-50 per cent which is obviously concerning.

"I work with approximately 100 manufacturers all in all, about a quarter of whom I use regularly – and they're all really struggling.

"Almost 30 per cent of our business comes between Thanksgiving and Christmas and no one is in a fully stocked position.

"I have resorted to hoarding my stock and have been for months so I have toys to sell at Christmas – but I still don't have anywhere near enough to meet demand."

The biggest toy companies in the US are also being impacted, with Hasbro claiming supply chain disruptions delayed $100 million in orders during the most recent quarter.

However, although they are experiencing problems of their own, industry giants are still first in line to be supplied with toys when they eventually arrive.

Kim claims this has always been the case, but usually manufacturers have enough stock to go around.

"It is quite normal for them to be fulfilling orders for Hasbro and Walmart as a priority," she added.

"They are their biggest customers so they get the pick of the bunch.

"But the problem is, they used to have enough stock to supply everyone else, whereas now, they don't.

Are you a retailer worried about how you'll stock Christmas? Let us know: mirror.money.saving@mirror.co.uk

"Of course Walmart are still having difficulties, they're not immune to challenging economic conditions- but their size means they're issues are a lot less dramatic.

"It's really frustrating because at this time I'd usually be on the shop floor engaging with customers and training staff.

"Instead, I'm spending every minute of the day behind my computer screen trying to organise more stock – it really is a stressful time for us."

Previous : Teacher, 29, who sexually abused girl in restaurant toilet sobs as she’s jailed
Next : Rarest 10p, 50p and £2 coins explained including Kew Gardens design worth up to £200