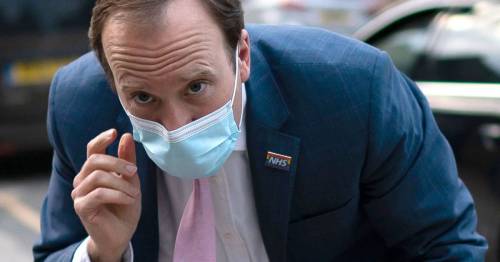 Matt Hancock stands accused of "insulting" NHS staff after he denied a scarcity of protective gear "led to anyone dying" on the Covid frontline.

The Health Secretary admitted to MPs on Thursday that PPE shortages came "pretty close" last year, but he claimed "at a national level", there was "never a point" when the UK "ran out".

But campaigners hit out at the claims, saying shortage which left some medics forced to rely on bin bags for protection meant "unnecessary deaths" at the height of the pandemic.

It came as NHS Providers revealed to the All-Party Parliamentary Group on Coronavirus that supplies were “dangerously low” at some points and a dearth of gowns and visors left frontline staff in fear.

Mr Hancock insisted in evidence to the Commons health and science select committee, however, that: "We've looked into this and there is no evidence that I have seen that a shortage of PPE provision led to anyone dying of Covid."

MP Layla Moran, chair of the APPG, said: “Our cross-party group has received harrowing evidence from families who lost loved ones to Covid caught on wards and from NHS and care home staff who were left without adequate PPE. The Health Secretary’s comments are an insult to the frontline staff who have repeatedly risked their own safety throughout this pandemic, often without adequate protection.

“We have heard first hand how a shortage of personal protective equipment has led to unnecessary deaths and leaving many individuals living with the life altering impact of long Covid."

The APPG has been handed some 500 evidence submissions on protective gear since opening its cross-party inquiry last year.

Among them was GP nurse Fiona Keay, who said she was hit with a high viral load “due to failure to introduce PPE to health workers during February and early March”. She is recovering from long Covid, and said: "I was acutely ill with coronavirus for 6 weeks due to my underlying asthma."

Another A&E worker, not named, said “at the height of the pandemic our trust, based on PHE (Public Health England) guidelines, were making us swab suspected Covid-19 patients wearing only a surgical mask, gloves and plastic apron.”

They added: “I strongly suspect this is how I contracted Covid 19. Whilst a surgical mask may provide some protection at a 2m distance, it is not possible to swab a patient or indeed perform most nursing interventions at such a distance."

Mr Hancock told the committee, which is aiming to learn lessons from the government's handling of the pandemic, there were "individual challenges in getting hold of PPE".

He did not fully deny Boris Johnson's former top aide Dominic Cummings ' claims that he tried to blame NHS chief executive Simon Stevens over PPE shortages, instead saying: "That is not a fair recollection."

The Health Secretary also said there was a Treasury-imposed cap on PPE prices – but this was lifted after he, the Chancellor Rishi Sunak and Prime Minister intervened.

Asked if an investigation found Sir Simon was not to blame for blockages he replied: “I can’t recall that.”

Previous : US President Joe Biden in heartfelt tribute to Prince Philip on what would be his 100th
Next : Covid rates in Euro 2020 host countries and what the rules are for each nation