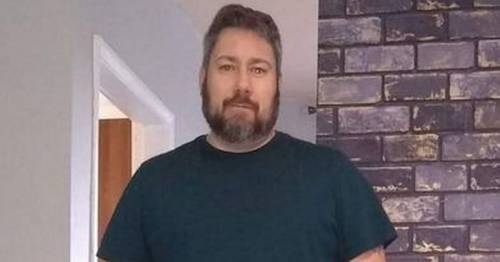 An amputee was beaten by knife-wielding thugs as he saved his nine-month-old dog from abduction.

Andy Garside has been left needing surgery on his broken nose after the horror incident on Tuesday evening.

The beating also left him with wounding to the stomach and arms, and has left his poor dog fearing people approaching her, even familiar faces.

Andy was walking his family's French bulldog Lilo through Hattersley, in Tameside, when he noticed two young men walking behind him.

The pair moved out of Andy's sight, but as the 39-year-old father-of-three continued his walk, he saw them waiting for him and his dog.

Andy's wife Stacey told the Manchester Evening News : "He didn't think anything of it at first – people were out and about. 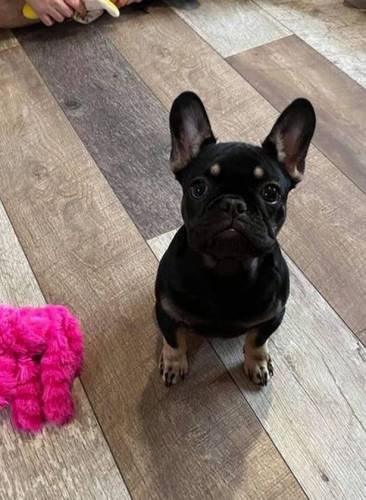 "But as he went around he could see they were waiting for him. They came up to him and one of the lads was saying 'that's a sick dog that – can we pick it up?'.

"Andy said no, because the dog was getting a bit nervous."

After one of the two men tried to pick up Lilo, Andy managed to pull her away.

But things turned violent when the pair began to punch Andy in the face, before one of the attackers wounded him in the stomach with what he believes was a Stanley knife.

Stacey, 41, said: "Andy was wearing shorts, and I think they targeted him thinking it was going to be an easy steal to take a high-value dog.

"They didn't expect him to fight them off. They scuffled for a bit before one said 'just leave it now', and they ran off towards the new-builds on the estate. 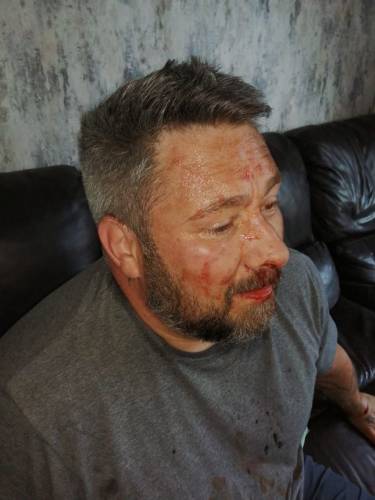 He has been left needing surgery after suffering a broken nose
(Image: Stacey Garside WS)

"Andy picked the dog up and went back the way he came. He knocked on somebody's door for help, and they gave him a towel as he was bleeding quite heavily."

After returning home and checking on Lilo, Andy called the police and later attended A&E at Tameside Hospital.

Stacey said: "Andy has a broken nose that is going to need surgery – his septum has completely come away.

"He has got concussion and his face is a bit of a mess.

"Lilo was traumatised, the poor thing.

"My friend and her husband came round to check we were OK. As they came in through the door Lilo ran through the living room making the most awful scream – she was that scared."

Andy was amputated after a number of failed surgeries to deal with tendon damage, before developing arthritis and chronic regional pain syndrome in his ankle joint, which left him unable to walk more than a few steps. 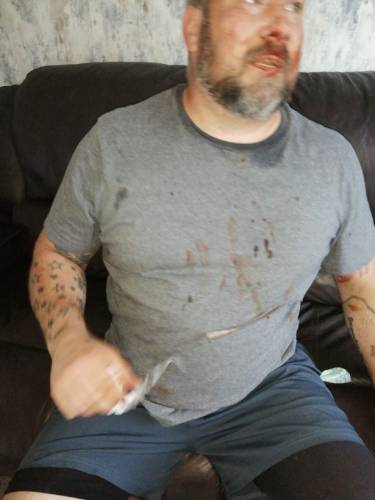 After his attack, he was in A&E until around midnight and suffered a seizure on Wednesday morning due to functional neurological disorder, which is triggered by stress.

Lilo is usually walked by his daughter Imogen, 19, while sons Zach, 15, and Blake, 13, had the day off school having been shaken by what happened to their dad.

Stacey: "I'm so glad that it wasn't Imogen who had taken her out.

"Zach saw his dad covered in blood and was really panicked. He didn't sleep all night checking in on his dad, making sure he was OK."

Greater Manchester Police is investigating the attack and any witnesses are urged to come forward.

A spokesperson for the force said: "Police were called to Cheriton Close in Hyde just before 6pm on Tuesday (June 8) to reports a 39 year old man had been assaulted while walking his dog.

"The man reported being approached by two men who were wielding a knife. They assaulted him and attempted to take the dog.

"The man suffered injuries to his face, arms and body.

"Inquiries are ongoing, and officers are keen to speak to anyone who may witnessed anything."

Anyone with information is asked to contact police via LiveChat on the force's website or call 101, quoting incident number 2259 of June 8, 2021.

Previous : ‘Four days to save our pub’ – as 1 in 5 face closure, regulars fight to buy their local
Next : ‘Britain’s pubs are vital assets so support residents seeking to buy Trawden Arms’