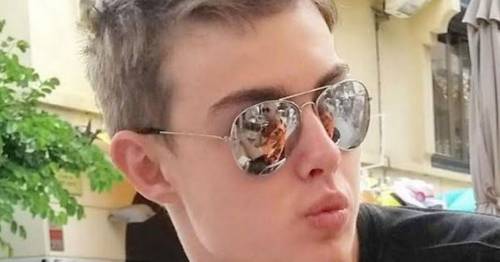 A heartbroken mum has paid tribute to her "amazing" and academically-gifted 18-year-old son who died after being put in an induced coma.

Joe Parker, 18, who was a second year sixth form student, was admitted to Southmead Hospital in Bristol after an adverse reaction to medication on February 17.

Joe, who was from Charfield in Gloucestershire, secured a place studying Advanced Maths at Warwick University while he was being treated in intensive care.

But his dad Barney, 47, mum Sarah, 47, younger brother Cameron, 15, and his school friends say they will forever remember Joe as the brilliant lad he was.

“It was almost like he took it as a challenge from an early age and within a year was bigger than any of the other babies of his age. During his school life he then towered over his class mates and by 18-years-old he was 6' 4".

He was admitted to Southmead Hospital in Bristol
(

His mum remembers how Joe was a determined soul from the off. He was driven to be the best at everything he would turn his hand to.

Miss Wilmott said: “From a pretty young age Joe had an aptitude for academia. He loved a score, and always wanted to be the top of the class.

“By the time he was halfway through junior school, Charfield Primary, he was better at maths than his teachers, and they were struggling to find things what would challenge him.

“He went on to Katharine Lady Berkeley school where he got straight-A*in his GCSEs and was studying maths, further maths, physics and chemistry at A-level which he was predicted to achieve A* grades.

“Joe had then been planning to study for a Masters degree in advanced maths at Warwick University. He had been accepted on to the course at Warwick a few weeks after being admitted to hospital.

“Joe would have been the first person in our family history to go to university, of which he was extremely proud. Yet he would always be the one who used to help people with their work.

Joe had gained a place at Warwick University
(

“His teachers were very impressed with the fact that he had the ability to explain anything to anyone who might be struggling. He was even paid to tutor a friend from Joe is remembered as a lad who would get on with anyone. As a result he had a incredibly large friendship group.

Miss Wilmott said: “When he was younger he didn't really have a specific group of friends but did tend to get on with everyone. When he went to KLB he met new people, and here he found some really close friends.

Joe liked to be out with his friends. Yet he equally loved playing games online and would get quite loud with it.

Miss Wilmott said: “We could often hear him shouting with excitement at what we thought was online gaming. However when you listened closely, what he was actually doing was talking about physics, or complex maths, and even helping people with their homework.”

As a younger teen Joe was art of a scouts group in Falfield. He was even awarded Scout of the Year when he was 14-years-old.

Miss Wilmott said: “He totally deserved the award as he always had time for others. He would go out of his way to look after newer members, and was always involved in fund-raising.

“At 14, Joe also got selected to go to the World Scout Jamboree in the USA. The event is only held once every 4 years, and is attended by scouts from all over the world.

“Hundreds of people had applied, and Joe was lucky enough to be chosen. He spent the next year raising £3500 to pay for the journey, and in 2019 he went to West Virginia with the rest of his team.”

When Joe had reached sixth form, he signed up to be a mentor helping children at the school who were facing challenges. Due to his nature those he supported knew he would be there for them as a pillar of support.

Miss Wilmott said: “He was always a really caring person, and when he reached sixth form at KLB he was accepted onto the mentoring program, helping other students with mental health issues.

"Joe made a lot of friends because they all knew he would always have time for them and he could always be trusted with whatever they said.”

Joe was determined to live his life outside the village where he lived. He took and passed his driving test first time.