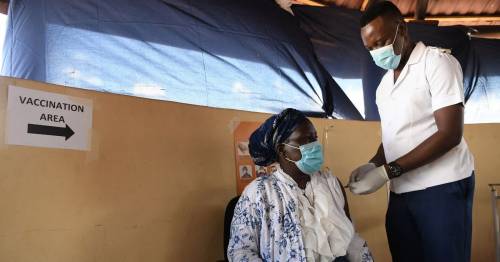 The UK has added six countries to its red list due to scientists' concern over a new super-mutant Covid variant that has been called the 'worst ever seen'.

The B.1.1.529 variant has first been found in cases in Botswana, South Africa and Hong Kong.

People who have recently visited South Africa, where the bulk of the variants have been found, and returned to the UK are now being contacted for testing.

Here is everything we know about the new variant so far, including how it differs from previous mutant strains of the virus and how dangerous it could be.

When did it first appear?

UK scientists first became aware of the new strain on November 23 after samples were uploaded on to a Covid variant tracking website from South Africa, Hong Kong and then Botswana. A total of 59 samples have been uploaded on to the website so far.

Three samples are from Hong Kong, three are from Botswana and the rest are from South Africa.

Outlining the situation in South Africa, one senior scientist said: “If we look at the results they had up to a week ago, less than 1% of people were testing positive in lots of areas. That’s increased very dramatically in some parts to 6% in the last few days, and so that makes me concerned quite rapidly on people that may be arriving [in the UK] now.”

Are there any cases in the UK?

Currently, there are no cases in the UK. People who have recently arrived in the UK from South Africa in the last 10 days will be invited to take a test.

Have any of these countries been put on the red list?

Yes. Flights from South Africa, Namibia, Lesotho, Botswana, Eswatini and Zimbabwe will be suspended from midday on Friday and all six countries will be added to the red list.

How is it different from the other variants?

Despite only being tracked for the past three days, the virus has been identified as having 30 different mutations already. By comparison, that is twice as many as the Delta variant, which has been the most prominent variant in the UK over the past few months.

The mutations contain features seen in all of the other variants but also traits that have not been seen before.

Will the vaccines protect people against it?

It’s too early to say. The mutations could potentially make the variant more transmissible and evade the protection given by prior infection or vaccination.

One senior scientist has said: “One of our major worries is this virus spike protein is so dramatically different to the virus spike that was in the original Wuhan strain, and therefore in our vaccines, that it has a great cause of concern.”

Has it been classed as a “variant of concern”?

Not yet by UK scientists as they do not have enough evidence on its levels of transmissibility, however, some have said they are concerned.

Professor Ravi Gupta, a professor of clinical microbiology at the University of Cambridge, has said: “B.1.1.529 has signatures of cumulative mutation indicating that it emerged in a chronic infection.

“B.1.1.529 does certainly look of significant concern based on mutations present. Many have been shown to impact binding by neutralising antibodies, and some are known to increase the ability of virus to enter cells or to make them fuse together to allow cell-cell spread.”

Professor Ewan Birney, deputy director general of EMBL and director of EMBL’s European Bioinformatics Institute (EMBL-EBI), said: “Early evidence from genomic surveillance in South Africa suggests that B.1.1.529 is a serious cause for concern. The South African surveillance and epidemiology groups should be commended for their timely data collection, analysis and transparency.”

It is known as a “variant under monitoring”, meaning scientists believe it may pose a future risk, but its impact is unclear.

How worried should we be about this variant?

Scientists in the UK are eager to acquire live virus cultures so it can be examined, but this takes time. It can take seven to 10 days at least to grow enough virus that can be shared with other scientists so they can study how it mutates and changes.

Officials will now also have to wait for data to come from South Africa. The earliest they are expecting evidence to come through is two to three weeks, but it could be as long as four to six weeks.