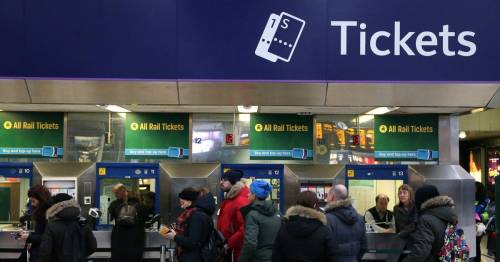 Rail bosses are reportedly planning to close every ticket office in England in the near future in a bid to save more than £500million, prompting fears it could shut out older passengers ahead of the biggest strike action in decades.

The industry is said to be putting together controversial plans to phase out paper tickets altogether over reforms to boost struggling networks.

It is feared the changes could severely impact the millions of elderly, disabled and disadvantaged people looking to use Britain's rail network.

The Daily Express reported there are also plans to cut 2,500 posts at Network Rail through voluntary redundancy, as well as reforms to increase weekend shifts and scrap restrictive working practices.

Follow our live blog on the rail strikes here.

The TSSA, the union for people in travel, has called for an urgent meeting with Transport Secretary Grant Shapps over the plans.

Manuel Cortes, TSSA general secretary, said: “Trust has hit rock bottom between rail workers and bosses in both the industry and government.

“We’ve been asking for clarity on rumours about ticket office closures for months but no proposals have been shared with us or the staff who work day in day out serving passengers.

“This Government has no respect for rail staff or passengers if they think this is the way to run our public transport services. The Government has badly miscalculated the reaction this will have from staff and passengers who rely on and value station staff.

“This will simply make more members vote for strike action.”

Charity Age UK says more than three million people over the age of 65 do not have internet access.

Caroline Abrahams of Age UK said: “Many more [older people] lack an up-to-date smartphone or tablet, or live in a place with unreliable broadband.

"These people have relied on buying tickets face-to-face or over the phone and then collecting them from a station machine.

“What are they expected to do if everything goes online?”

The plans come ahead of strike action by the RMT due to take place tomorrow, Thursday and next Saturday, and on London Underground on Tuesday.

Would-be passengers have been urged not to travel on the affected days when as few as one in five services will be going ahead as planned.

There could be more misery on the horizon as RMT general secretary Mick Lynch predicted the industrial action could spread to other services this summer.

The Transport Secretary dismissed calls for negotiations, instead branding the strikes as a “stunt”.

The Department for Transport said: “Strikes should always be the last resort, not the first.

“It is hugely disappointing and premature that the RMT is going ahead with industrial action."