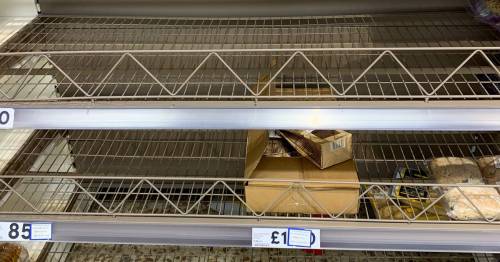 Drivers are struggling to fill up their cars, while families are being warned there may not be enough turkeys to go around this Christmas.

As shortages continue to engulf the UK, we explain what items are in low supply.

There are several issues being linked to the supply chain crisis. One of the biggest factors that has been grabbing headlines in recent weeks is a shortage of lorry drivers.

This is thought to have been triggered by post-Brexit rules – with many European drivers choosing not to return to the UK – along with a backlog of HGV tests.

Various industries are also being hampered by a gas shortage, with carbon dioxide (CO2) vital in the production of meat and fizzy drinks.

Meanwhile, there are also thought to still be knock-on delays from the start of the pandemic with toy retailers struggling to get goods over from Asia.

Petrol stations are struggling to keep up with fuel demands
(

Petrol stations up and down the country have been forced to shut after being run dry of fuel.

The government has stressed that there isn’t actually a shortage of petrol in the UK – instead, the troubles are blamed on panic buyers purchasing more fuel than they need.

Regardless, that will provide little relief to drivers who are struggling to fill up right now.

The lack of lorry drivers is stopping milk deliveries getting to stores, according to the National Farmers' Union.

In some cases, the NFU says farmers have actually been told to throw away milk because there isn’t a way to transport it.

Dairy giant Arla, which supplies milk to all major UK supermarkets, has been forced to cut back on its deliveries by the lack of lorry drivers.

The boss of supermarket giant Iceland last month warned that some stores were selling out of bread.

Richard Walker, the managing director of Iceland, said shops were “struggling to replenish as quickly as we need”.

Speaking to Radio 4’s Today programme, he said: “We’ve had deliveries cancelled for the first time since the pandemic began, about 30-40 deliveries a day.

“Things like bread, fast-moving lines, are being cancelled in about 100 stores a day.”

Supermarket shoppers could soon struggle to get pasta as farmers report a poor harvest of the vital grain needed to make it.

Durum wheat is used to make wheat pasta, but now farmers in Canada have downgraded their forecast for the crop this year.

A pasta shortage would be an eerie reminder of the situation in early 2020 as the pandemic took hold.

Many supermarkets ran short of goods like pasta as worried shoppers stockpiled food.

What items have you noticed that are in short supply? Let us know in the comments section below

Turkey may be off the menu this Christmas
(

Meat supplies in supermarkets have been hit by both a lack of workers in processing plants and farms, combined with a UK carbon dioxide shortage.

CO2 gas is used to stun animals before slaughter and in the vacuum packing of food products to extend their shelf life.

Some shoppers have complained that they can't find their favourite cut or joint in stores, while the meat industry has said the on-going issues could affect dinners this Christmas.

Turkey and pig in blankets could be just some of the meats that are off the dinner table this year, experts have warned.

There are fears the gas shortage and lorry driver issues could also mean fizzy drink supplies are in short measure.

CO2 is used in soda and carbonated drinks, so a shortage of gas means manufacturers may not be able to keep up with orders.

It was reported this week how Irn Bru could be in short supply, while last month Coca Cola warned how its supply chain has come under pressure from a "shortage of aluminium cans".

The boss of toy retailer The Entertainer has warned of shortages this Christmas in a bleak message to parents.

Speaking on This Morning earlier this month, Geoff Sheffield, chief commercial officer of The Entertainer, explained how the supply chain problems are being caused by a range of issues.

This includes a lack of shipping containers from Asia and ongoing HGV driver shortages.

Mr Sheffield urged parents to buy what they can now over fears there isn’t a lot of time left to get toys on the shelves.

Families could see a potential shortage of Christmas trees and higher prices this festive season.

One-tenth of real Christmas trees sold in the UK are imported, so there are fears that delivery issues might mean they can’t be shipped over to the UK.

Mark Rofe, who owns ChristmasTrees.co.uk, said: "We've spoken to our UK growers and they are all facing the same challenges.

"They are seeing an increase in demand for their product, especially from clients who would usually import their trees from Europe.”

A global shortage of microchips has halted the production of new cars.

With fewer new vehicles in showrooms, drivers have instead turned to buying second-hand vehicles – causing a huge spike in price for sought-after cars.

The microchip shortages caused several manufacturers – including Jaguar Land Rover and Honda – to temporarily suspend work at their UK plants.

Halloween is next month, but fans of the spooky holiday have been warned that there is a shortage of the seasonal treat.

Farmers are concerned that a recent bad weather has failed to ripen crops which will result in a poor pumpkin harvest.