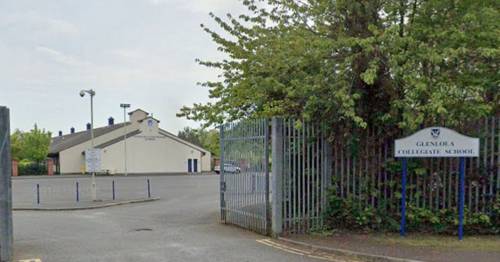 A grammar school has been blasted for its "draconian" rules for pupils using the toilet.

Glenlola Collegiate School in Bangor, Northern Ireland, has been criticised for asking pupils to leave their mobile phone with their teacher, sign out, get a key at reception and be accompanied to the bathroom where they are waited on.

The all-girls school in Co Down only has three single disabled toilets that are currently in use.

It is understood that previously there was only one toilet in use for the school's population of roughly 1,100 from the second week of November, BelfastLive reports.

Some parents have taken to social media to speculate that the number of toilets being in use is because of previous reports of anti-social behaviour or a part of Covid-19 restrictions.

The school only allows pupils to use the loo if they submit their mobile phones, sign out, get a key at reception and be accompanied to the bathroom where they are waited on (file image)
(

The school has since said it will not be commenting.

Parents have also claimed there is a lack of communication from the school.

It's understood at least one of the bathrooms has no ventilation.

One parent said they're concerned for the well-being and health of students due to this new rule.

They said an admin on the North Down Mums group claimed a pupil wet herself because she couldn't get to the toilet.

They said: "My niece had to stand for over 25 minutes waiting on the toilet, then the teacher came out and told her she had to get back to class and she struggled for the rest of the afternoon. It's dreadful.

"My daughter and a few of her friends are struggling quite a lot. They're in Year 8 and Year 9, and some of them have just started their periods. They don't really know in their bodies what's going on, and they need to get out to the toilet to check they're alright."

Their daughter said pupils are allowed into the toilet at break time and lunch, but because of the queues, not everyone can go during that time.

She explained: "You're allowed into the toilet at break and lunch, we have 20 minutes at break which is 20 minutes to socialise and eat and prepare for our next classes.

"Then we have an hour for lunch, but the queue for the canteen usually takes about a half-hour to actually get in, never mind eating, and you also have to get ready for your next lesson.

"We have to leave our phones at the teacher's desk, walk to reception, then they'll show us to the toilet. Everything's recorded so parents can see when you've gone to the toilet.

"My friend went and there was a queue of about 15 people, and they were all told they had to get back to class, so 15 of them didn't get to use the toilet."

Parents are hoping the policy will be reversed citing health concerns.

They added: "We're not very happy about it – we're concerned for the girls' well-being and health. There's the risk of toxic shock for girls who are using tampons if they're having them in all day and can't get to the toilet.

"None of the parents have been informed about it either which has made a lot of us quite angry about it. That they've just made this rule without informing the parents."

Glenlola Collegiate School were contacted by BelfastLive to address these claims but refused to comment.

The Mirror Online has contacted the school for a comment.