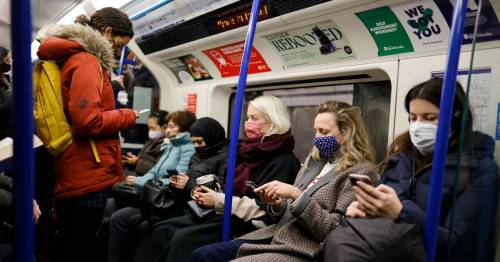 Boris Johnson is poised to drop a raft of England’s Plan B rules next week after MPs were told they can be “substantially reduced”.

Work-from-home guidance and Covid passes for nightclubs are expected to go on January 26, though reports suggest face mask rules on shops and public transport will stay.

Face masks in school, travel tests on arrival to the UK and daily contact tests could all also be eased.

Boris Johnson is meeting his Cabinet to discuss the measures this morning and will make an announcement to Parliament at lunchtime.

Health Secretary Sajid Javid earlier said he is "cautiously optimistic" that the Government can "substantially reduce" Covid restrictions next week – while No10 hinted an announcement is due within days.

He told MPs it’s likely "we have already reached the peak of the case numbers of hospitalisations" as ministers prepare to review Plan B measures next Wednesday.

Mr Javid is the third minister in a week to sound hopeful about lifting Plan B measures.

New positive Covid cases have fallen 42% in a week with 84,429 recorded yesterday, and hospital admissions have plateaued.

But deaths are still up 39% in a week to 1,845 and 2,357 people were admitted to hospital with Covid yesterday alone.

"That is why we are the most open country in Europe.

"I have always said that these restrictions should not stay in place a day longer than absolutely necessary.

"Due to these pharmaceutical defences and the likelihood that we have already reached the peak of the case numbers of hospitalisations, I am cautiously optimistic that we will be able to substantially reduce restrictions next week."

Here are all the changes that could happen, or have happened already:

Since December 13 people have been urged to “work from home if you can” in England.

This guidance, which is not legally binding, is a key way of getting cases down – but the government says it has “immediate costs to the economy”.

Tory ministers have repeatedly emphasised how much worth they place on going into offices in person.

As such, it is a key measure the Prime Minister will want to get rid of when England’s Plan B rules are reviewed.

Since December 15, nightclubs and large events like gigs and football matches in England have had to ask punters for proof of either a vaccine, or negative lateral flow test.

But the law that enforces Covid ‘passports’ expires at 11.59pm on Wednesday 26 January.

Boris Johnson would likely need to put any extension to a vote – and last time around 100 Tory MPs rebelled.

The Prime Minister is already battling for survival over Downing Street parties, and another huge revolt could be fatal.

Mr Johnson had suggested the definition of ‘vaccinated’ for a Covid pass would be updated from two to three doses.

This has already happened in Scotland as of January 17 – but it will not necessarily be the same in England.

Officials are still waiting for many people who caught Covid in December to get a booster, as being infected triggers a 28-day ban on getting jabbed.

But face masks in shops and on trains might stay

Face masks were made compulsory in England in two waves through winter, first on public transport, then in shops.

But these face mask laws came before Plan B, and reports have suggested they could outlast it too.

Sunday newspapers have claimed some face mask restrictions could be extended beyond January 26.

England's secondary schools have told students to wear face masks in the classroom since January 4.

But reports suggest this rule will be axed around the time Plan B is eased on January 26 – or even before that date, as it’s not formally part of Plan B.

Education Secretary Nadhim Zahawi said on Sunday: “I don’t want to see masks in the classroom for a day longer than is necessary.

“And on January 26 we’ll review that and I hope we’ll be able to take it away.”

Travel testing axed for the vaccinated

Vaccinated travellers will soon be allowed to return to the UK without taking a Covid test at all, if a change gets the go-ahead.

Currently vaccinated travellers must take a lateral flow test within two days of returning to Britain.

Anyone who tests positive must isolate for ten days, although this can be cut short with a negative lateral flow test on days six and seven.

But it’s understood Transport Secretary Grant Shapps is looking at removing this last UK test requirement for vaccinated travellers by the end of January.

If so, it is likely to coincide with the review of the plan B measures on January 26.

Unjabbed travellers would still need to take UK arrival tests – and of course, British tourists may still have to take tests when heading abroad, depending on which country they go to.

The self-isolation period for people with Covid was shortened this week (see below) to at least five full days in England.

But if you’re a contact of someone with Covid, the rules haven’t changed yet – you don’t need to isolate, but you do need to take a daily lateral flow test for seven days.

When isolation changes were announced last week, the government said it would review this guidance – hinting it could be cut to five days too.

The government said it would “consider the guidance for close contacts of people with COVID-19, including around the advice for fully vaccinated contacts to take daily LFDs for 7 days.”

So far no change has been announced.

… And the changes already confirmed

The Covid isolation period in England has been cut to five full days since January 17.

Previously people who tested positive for Covid could be freed midway through their seventh full day of isolation, if they test negative on days six and seven.

That period has been cut by between 24 and 48 hours, after huge pressure from Tory MPs and a staffing crisis in the NHS.

Under the new rules, people in England with Covid must isolate for at least five full days.

They will then be able to leave isolation at the start of the sixth full day – if they have tested negative for Covid on both Day 5 and Day 6.

This means the new total isolation time is, in reality, somewhere between five and six days depending on what time you went into isolation.

UK Health Security Agency data shows around two thirds of positive cases are no longer infectious by the end of Day 5. This rises to 93% if people have two negative lateral flow tests, 24 hours apart.

In Scotland and Wales, the isolation period is still seven days (with two negative lateral flows on Day 6 and 7).

Booster vaccines for 16- and 17-year-olds

All eligible 16- and 17-year-olds are able to book a Covid booster jab from January 17.

Previously, boosters were only recommended for clinically vulnerable 16 and 17-year-olds who are most at risk from Covid-19.

But recent data from the UKHSA showed two doses were not enough to stop people becoming unwell from Omicron.

More than 600,000 in the age group in England have had their second jab, so will be eligible for a booster.

However, not all are eligible now, as they still have to wait until three months since their second dose.

About 40,000 teenagers are newly eligible now, and many of the rest should become eligible in the coming weeks.

Scotland's limit on football matches and other outdoor events has been scrapped from January 17.

Football matches and other outdoor events in Scotland were limited to only 500 people from December 26, meaning Boxing Day games were effectively fan free and Hogmanay festivities were axed.

That 500-person limit has now been axed – followed by all other Omicron restrictions in Scotland from next week.

Covid restrictions in Wales are being eased over the next two weeks, the Welsh Government has confirmed.

Since Saturday, as many as 500 people have been able to attend outdoor event activities – rising from 50.

And from this Friday 21 January there will be no limits on the number of people who can take part in outdoor activities.

Nightclubs could reopen from January 28, which is when alert level 0 restrictions will come in to force for indoor restrictions.

Previous : U.S. calls for de-escalation of Saudi-Houthi conflict in Yemen
Next : NYPD officer killed, another seriously wounded in shooting