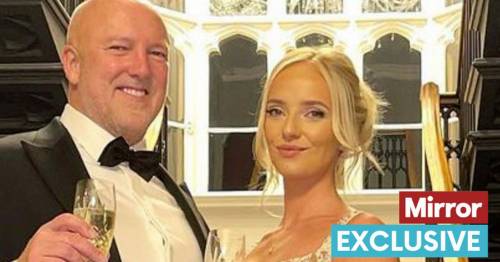 Age gap fiancee, 23, insists she’s not a gold digger after falling for millionaire, 56

She's a 23-year-old who loves the finer things in life and he's a millionaire more than twice her age who owns an 11-bedroom mansion.

But Allana Luke and her fiancé Jeff Winn insist they have found true love.

The pair have been inseparable since their second date to Marbella where Jeff bought the ex-travel agent a pair of diamond earrings for her birthday.

And Allana, whose mum compares the romance to the film Pretty Woman, wants everyone to know the love she has for Jeff is genuine.

“There’s no denying Jeff looks much older than me, which can cause people to roll their eyes when they see us,” she says. “They automatically assume I am just another girl after his money.

“I don’t blame them as it would be my first thought too. But I would still be with Jeff even if he lost the house and went bankrupt.”

Since the couple met in 2020, Allana has been spoiled with an Audi TT, a Rolex watch, designer handbags and holidays to destinations such as Barbados and Thailand.

But Allana, who was living in a council flat before she moved in with Jeff, says she is willing to sign a pre-nup before they marry and relinquish rights to the mansion – a former girls’ school in Jesmond, Newcastle-upon-Tyne, where the couple have a full-time cleaner, estate manager, bartender and three gardeners.

Allana, who says she has always liked older men, met Jeff on Tinder in October 2020.

She says: “I decided to increase the age range on my Tinder as I was fed up with immature guys my own age.

“I set it to 25 to 60-year-olds, and the next day I matched with Jeff. His profile made me stop as his photo was of him standing outside the house. His bio said he’d just finished restoring it so I thought it would be a good story to tell friends, even if it didn’t work out.”

Jeff's historic home which used to be an all-girls school
(

But the couple hit it off straight away, with law firm owner Jeff inviting Allana to his mansion, where they drank champagne and ate venison stew.

A week later they flew to Marbella to celebrate Allana’s birthday and Jeff gave her a pair of diamond earrings.

It was in Spain that the couple first declared their love for each other.

Allana says: “We were only meant to be there for a week but we ended up staying for 17 days.

“I was so shocked when Jeff gave me the earrings and told him off for spending too much money because we’d only known each other a week. But I was also over the moon with my present.

“Jeff told me he loved me in Marbella and I said it back as I just knew. There are no games with an older man. They don’t hide how they feel. We slept together for the first time on holiday. His age certainly didn’t make a difference.”

The patio is set up for entertaining
(

When the couple returned from Spain, Jeff invited Allana to move in with him and they have been toge-ther ever since.

She says: “I’m not from a wealthy family and grew up in a council house so the castle is still a shock.”

On June 2, Jeff ­proposed to Allana with a 3.4ct solitaire sparkler. She has ­already spoken to him about signing a pre-nup. Allana says: “He doesn’t think one is necessary, but I would like him to have peace of mind.”

Allana says she and Nina often go out clubbing together while she “gets on well” with Josh and has met Jeff’s ex, who “is fine with it”.

She says: “My mum is super excited – she has always wanted me to have this fairytale life. She compares me to Julia Roberts out of Pretty Woman.

“Jeff is so kind, easygoing and funny. He’s so generous and loves to make everyone around him happy.

Allana in the hot tub at their home in Newcastle
(

They have been inseparable ever since their second date
(

“He is so down-to-earth. I recently introduced him to B&M bargains and he loved it.” Allana adds: “Once people get to know us, they can tell we’re a great match. We have the same banter and are always laughing.

“I’m not ashamed to show my affection towards him in public. I will always hold his hand as I am proud that we are together.

“He may be older but he is definitely young at heart. He used to party more than me but I am a home bird.”

Allana, who is originally from North Shields, continues: “My life has changed a lot but it is still very normal. I make him lunch, which is usually chopped olives on toast or salmon with vegetables, then we just have a cup of tea.

“We sometimes have friends over for dinner during the week or just hang out and watch TV.” Allana adds: “On the surface, it may look like I am with Jeff for materialistic things but when people see us in person, they can see we are so natural.

“All of Jeff’s friends have commented on how much happier and healthier he is since I came into his life. It’s refreshing to hear.” Allana is sharing her story in a bid to normalise age gaps in couples.

“I want people to realise it is OK to have an age-gap relationship,” she says.

“We shouldn’t have to hide the loves of our lives because we are scared of getting judged.”

Jeff says: “I was looking for someone who is beautiful on the inside and out.

“I found that in Allana and instantly knew it was more than a fling.

“I have dated younger women before and my family didn’t approve. But they all adore Allana because they can see how she positively impacts my life.

“For many years, I was a bit of a naughty boy but I’m so much more relaxed than I used to be.

“I’m quite well-known in Newcastle and young men often high-five me when we are out together.

“But we do get stares when Allana is all dolled up. They are just jealous.”

Previous : Grandad ‘trapped in his home’ by fatal condition that will need oxygen tanks soon
Next : Poorly greyhound needs £7,000 medical help after breaking every bone in his paw