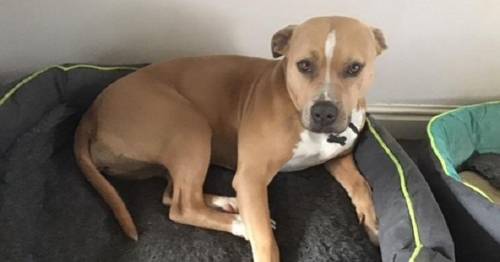 She was rescued from an abusive home and matched with owners who couldn't do enough for her – but has sadly ended up back under the RSPCA's care.

Crossbreed Dora has been reregister for adoption with the RSPCA after spending almost four years in her home because she started fighting with her owner's original dog and other dogs on walks.

Despite leaving the charity's Macclesfield, South East Cheshire and Buxton Branch as a puppy who was "friendly with all dogs she met", her personality change now means she must be rehomed into a pet-free home.

A statement reads: "When Dora first came to us back in 2017 she was six-months-old.

"She along with other animals were removed from the property after reports and video footage were sent to the RSPCA of regular dog beatings.

She needs to be the only dog in the house
(


"The perpetrators were prosecuted and received a custodial sentence.

"We are saddened to say that Dora is now looking for a new home since she was adopted in 2017.

"She was always well socialised; fostered with two dogs originally and was friendly with all dogs she met.

"However, as time went on post-adoption the relationship with the resident dog and dogs out and about has gone downhill.

"She has fought the other dog in the home a couple of times and, as the dog is much older and stressed, the decision has been made for Dora to be rehomed as the only dog."

But as the RSPCA branch do not have space to house her at this time, Dora will live with her family of almost four years until a new owner comes forward.

Dora has been described as a "very affectionate girl" who loves to sit close to her owners and lean in for fuss. She loves playtime and can keep herself entertained with a ball or rope for hours.

The statement adds: "She needs an adult home with experience and knowledge but no other pets.

"A quiet rural home away from Urban and Residential streets where she can relax on walks and just enjoy herself.

"She can be wary of strangers in the home, so a prospective new owner would need to visit her a couple of times.

"She is such a lovely dog, she just needs all the attention to herself and to be number one.

"We have two reports from a behaviourist who has assessed Dora which we will share with any prospective adopter whose application is successful on paper it's read so much worse than is the reality so meeting Dora should be the deciding factor. Dora is on Apoquel for sensitive skin."

If you're interested in rehoming Dora, or any other dogs at the RSPCA's Macclesfield, South East Cheshire and Buxton Branch, contact their team on 07846 539500 or email them via rehoming@rspca-macclesfield.org.uk.