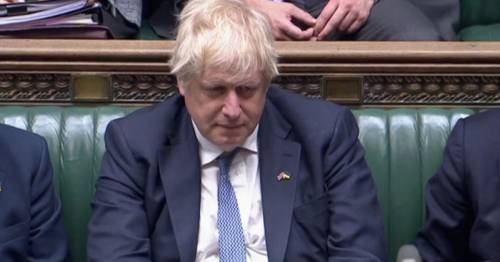 Boris Johnson today unveiled 38 planned laws in his Queen’s Speech in a bid to wrestle back authority after Partygate.

But Keir Starmer branded it the “latest chapter in a pathetic response to the cost of living crisis”.

And Resolution Foundation director Torsten Bell said: “British politics is out of ideas.”

A stream of critics pointed out there was no cash now – or even promised later – to address the cost of living crisis.

That means the speech had more focus on six months’ jail for protesters who chain themselves to gates – in a Bill to be introduced to Parliament tomorrow – than there is on the cost of living.

Meanwhile a ban on gay conversion therapy is not a ban, there’s no Employment Bill despite multiple promises, and Northern Ireland’s stability hangs in the balance.

Labour MP Meg Hillier, chair of the Public Accounts Committee, blasted: “Our Prime Minister has his head in the sand about real life.

“There is no direction from this government that’s flailing around trying to come up with a list of headlines – but unable to competently govern this country in the interests of people I represent.”

Here’s a round-up of the biggest things missing from today’s Queen’s Speech in the State Opening of Parliament.

No help now for the cost of living crisis

The government boasted it had already given £22bn in cost of living support, including a £150 council tax rebate.

But the Queen’s Speech had no mention of new cash despite Prince Charles vowing to “help ease” the pressure, in a speech delivered from a golden throne. Instead the government said it’ll bring forward more cash “if needed”.

And Boris Johnson sparked chaos when – speaking to MPs – he hinted at more help in “the days to come”.

Treasury and No10 sources immediately hosed down any suggestion of instant help or an emergency budget, with the Chancellor instead waiting to the Autumn.

An Energy Security Bill will bring down costs of heat pumps and keep the bills price cap, but that’s in the long term.

Dan Paskins of Save the Children said: “Families we work with are skipping meals, rationing their power and taking on unsustainable levels of debt. But again, instead of taking serious action ministers have buried their heads in the sand.”

Boris Johnson snubbed workers by leaving an Employment Bill – pledged for years – out of the Queen’s Speech.

It would have included a ban on restaurants creaming off waiters’ tips that was first promised in 2016.

Ex-PM Theresa May said she was “disappointed” in the delay.

It also would have brought forward more rights to request flexible working, which are in the spotlight after Covid.

Ben Harrison, Director of the Work Foundation at Lancaster University, said “vital opportunities have been missed”.

TUC general secretary Frances O’Grady added: “Today, bad bosses up and down the country will be celebrating.

“No employment bill means vital rights that ministers had promised – like default flexible working, fair tips and protection from pregnancy discrimination – risk being ditched for good."

Boris Johnson listens to Theresa May saying she was 'disappointed'

Mental health reforms are kicked down the road again

One of the 38 Bills is a Mental Health Act Reform Bill to give patients the “dignity and respect they deserve”.

It would modernise the Act to give the sickest more personalised care and stop them being detained unnecessarily.

Yet the Bill is one of five only promised in ‘draft’ form meaning it’s very unlikely to become law in the next year.

Instead it may only become law by Spring 2024 – or even later if there are delays or a general election.

“I think those suffering from mental health deserve better from the government.”

Ex-PM Theresa May blasted: “I am deeply disappointed that we only see draft legislation on a new Mental Health Act"

A ban on conversion therapy isn’t really a ban

This will partially fulfil a Tory pledge first made by Theresa May in 2018. But, crucially, only partly.

First of all, it’ll only ban adults from being "coerced or forced" to undergo conversion therapy – meaning those who persuade people to choose of their free will be obeying the law.

That’s despite ministers branding conversion therapy “abhorrent” and vowing to ban it for under-18s, forced or not.

Secondly, the ban will not cover trans people after a Tory U-turn that has angrily divided LGBT+ campaigners from ‘gender critical’ activists who warn about irreversible changes for teenagers.

Boris Johnson’s spokesman refused to promise a trans conversion therapy ban, with the government saying it would “recognise the complexity of issues and the need for further careful thought”.

Northern Ireland’s stability hangs in the balance as crucial questions on Brexit and the Troubles are left unanswered.

The Queen’s Speech stopped short of announcing a Bill to override the Northern Ireland Protocol.

But in notes to the Speech, the government warned it would “take the steps necessary” to protect peace in the region.

And No10 warned the situation is “now very serious” after a call between the PM and Irish premier Micheal Martin.

The Protocol is the bit of Boris Johnson’s Brexit deal that slaps EU checks on some goods arriving in Belfast. The Unionist DUP say it must be torn up before they’ll help set up a new power-sharing government in Stormont.

Meanwhile a new Bill will establish a Commission for Reconciliation and Information Recovery on Troubles deaths.

People will get immunity from prosecution – but after protests that this would let people off for crimes, immunity will only be for “individuals who cooperate with the new Commission”.

But both of the plans appear to be shelved as the Queen’s Speech this time makes no mention of them.

And Boris Johnson's spokesman refused to rule out dropping the plans completely.

Eduardo Goncalves, of the Campaign to Ban Trophy Hunting, said: “This is starting to feel like Groundhog Day.

“The Government promised to ban British trophy hunters from bringing home their sick souvenirs three years ago. It did it again after the 2019 general election , again last year, and now here we are yet again.”

Human Rights laws are set to be scrapped

Tory ministers plan to overhaul Britain’s human rights laws and replace them with a Bill of Rights.

They don’t explicitly pledge to scrap the Human Rights Act but it's understood that could happen in the process.

The Bill vows to “establish the primacy of UK case law” over that from Strasbourg. And “UK courts can no longer alter legislation contrary to its ordinary meaning” under the Bill, the government says.

It will also “guarantee spurious cases do not undermine public confidence in human rights so that courts focus on genuine and credible human rights claims,” according to the government.

Sacha Deshmukh of Amnesty International UK said: “Scrapping the Human Rights Act and replacing it with a narrower, meaner Bill of Rights will make it even harder for ordinary people to challenge mistreatment at the hands of the state."

Liberty’s Director, Martha Spurrier, said: “It’s a blatant, unashamed power grab from a Government that wants to put those in power above the law. They are quite literally rewriting the rules in their favour so they become untouchable."

Prince Charles recited the government's words about the cost of living, from a golden throne
(

Plans for a ‘lifetime deposit’ are nowhere to be seen

Last year’s Queen’s Speech pledged to give renters a ‘lifetime’ deposit they could take with them from flat to flat.

This would stop you having for fork out a four-figure sum while waiting for your last deposit to be returned.

The idea had kicked around since a 2019 consultation. And last year the government said it would “ease the burden”.

Yet it’s nowhere to be seen in plans for a Renters Reform Bill.

It’s understood further details will be set out in a private rented sector White Paper “shortly”, but the government has not confirmed if this will include the lifetime deposit.

Previous : Failing firms could be barred from taxpayer-funded contracts in Tory shake-up
Next : Ava White murder suspect ‘kept smiling at her’ and called her ‘cheeky’ before stabbing