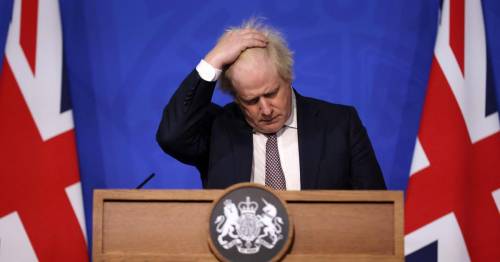 Boris Johnson is fighting for survival after some of his own MPs turned on him over his attendance at a lockdown drinks party in the Downing Street garden.

The Prime Minister tried to quell the fierce backlash over the revelations that he joined 40 guests for a "BYOB" bash on May 20 2020 – when the rest of the country was living under strict Covid curbs.

But his apology to the Commons on Wednesday failed to win over mutinous MPs, with several senior Tories calling for him to resign.

And his claim that he thought it was a work event was met with widespread mockery after reports of tables stocked with booze and nibbles.

So what next for Boris Johnson? The Mirror's Head of Politics Jason Beattie takes a look at the factors determining how long he has left in No 10.

Boris Johnson ’s ‘apology’ has bought him time but not credibility.

The wording was too calculated to be effective. For an apology to work it has to be sincere.

By apologising for mistakes others had made rather than any lapse in his own conduct it was evident the Prime Minister’s remorse was expedient rather than heartfelt.

He then breached the bounds of credulity by claiming the party he attended was a work event that was technically within the rules.

Holding the event angered people; pretending it was not a party invited only scorn, which is arguably more damaging.

How long he has left in office depends on three factors.

His fate could be sealed by Sue Gray if her report into the various parties specifically criticises the Prime Minister’s behaviour.

The top civil servant is investigating May 20 gatherings as part of her probe into claims of rule-breaking parties in Westminster.

The critical report is not expected to come until next week at the earliest.

Ms Gray is believed to be looking at least six events, including four events first revealed by the Mirror – three in Downing Street and one at the Department for Education.

Meanwhile, we should not exclude the possibility that another story will emerge of Johnson’s rule breaking, Covid related or otherwise, in the next few weeks.

It’s not as though he is without form.

The second factor will depend on the survival instinct of Tory MPs.

The majority of Scottish Tories have already concluded it is in their interest to get rid of Johnson as quickly as possible.

MPs in marginal seats in England and Wales may soon follow suit if the Tory poll ratings continue their downward trajectory and their constituency associations start agitating for a change of leader.

However noble or ignoble the intentions of our elected representatives they are usually driven by self-preservation more than anything else.

The third element, which may prove the most crucial, is when Johnson’s potential successors judge is the most opportune moment to move against him.

Rishi Sunak, Liz Truss and Jeremy Hunt, the most high profile contenders, may conclude it would be better to keep Johnson in office as the Government weathers the cost of living crisis and this May’s local elections.

Against that is the risk of being contaminated by association with Johnson as he poisons the Tory brand.

This appears to have been part of the lesser-spotted Sunak’s thinking as he scuttled off to Devon yesterday before issuing a lukewarm statement of support for the Prime Minister.

That is not to say a challenger may not move earlier if Johnson’s situation deteriorates still further but at the moment it may pay to be patient.

Then there is the question of a whether it would be self indulgent to launch a leadership challenge while the country is still wrestling with Omicron.

Though it is hardly seemly that the energy of Johnson is primarily focused on his own survival while the energy of much of Cabinet is devoted to game-planning, bloodletting and scheming.