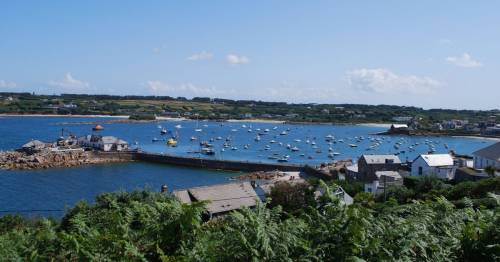 2,300 Brits forced to take a ferry to get to a bank after island closes last branch

Around 2,300 people on the Isle of Scilly have to take a plane or ferry to use a bank branch as their last remaining bank closes today.

The final bank, Lloyds , shuts its doors at 3pm on Monday.

The bank is based on the island of St Mary's, the largest of the Isles of Scilly, which are based off the coast of Cornwall.

The closest bank branch for Scilly residents is now Penzance, in Cornwall – a journey of more than five hours if using a ferry.

Lloyds said it had been forced to shutter the branch due to falling footfall, though it is keeping an ATM so residents can withdraw cash.

Have you been affected by bank branches closing? Message mirror.money.saving@mirror.co.uk

The Lloyds branch on St Marys, the Isles of Scilly
(


A Lloyds Bank spokesperson said: “We made the decision to close our St Mary’s branch as customers were choosing to bank in different ways and using the branch less often.

"We've spent time working with the local community to advise and support with alternative access to banking, such as our community banker, or the Post Office – which is a short walk away from the branch."

The Lloyds community banker is a member of the bank's staff who visits St Marys every two weeks so residents can do face-to-face banking.

The banker can be found in the office of the travel agent Isles of Scilly Travel fortnightly on Thursdays from April 28, from 9.30am to 2.30pm.

Brits can access some banking services at Post Offices due to a tie-up between banks and the mail delivery institution.

Banks pay the Post Office to do this to offset the impact of them closing branches .

However, this range of services is limited compared to a proper bank branch. You cannot open a bank account at a Post Office, for example, or sort out issues with your account.

What you can do at a Post Office also depends which bank you are with.

If you are a Bank of Scotland, HSBC or Lloyds customer you can use all Post Office banking services – withdrawing and depositing cash, checking your balance and depositing a cheque.

But if you bank with Nationwide, all you can do is withdraw cash and check your balance.

High street banks are due to close 281 branches this year , blaming falling footfall.

Lloyds this month said it will shut 60 bank branches due to a shift to online banking, and many rival banks are doing the same.

HSBC is closing 69 bank branches due to a shift to online banking, in a move affecting around 400 staff.

TSB is to close 70 bank branches in the UK this year, while NatWest will shut 32 outlets, including 11 Royal Bank of Scotland sites.

Lloyds Banking Group will be closing 48 of its branches, for its brands Lloyds Bank and Halifax.

Barclays shut two of its physical branches in February.

Previous : Schoolgirl, 16, kicked in head during savage playground attack caught on video – World News
Next : Asda staff secure pay rise after strike threats with workers to get £10.10 an hour