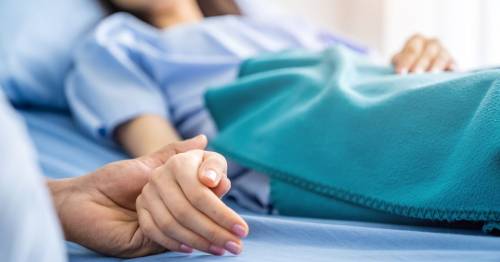 Up to 50,000 people missed a cancer diagnosis because of the Covid crisis, with the NHS braced for patients to come forward in swathes., the charity said.

The charity claims that 47,600 fewer Brits have been diagnosed with the disease compared to pre-pandemic levels.

Diagnoses of prostate cancer are 23 per cent lower in England than expected, while pick up of multiple myeloma, a type of blood cancer that develops from plasma cells, is down by 14 per cent, and breast cancer by 12 per cent.

Steven McIntosh, executive director of advocacy and communications at Macmillan Cancer Support, warns the NHS faces an “uphill battle” when the "backlog" of patients come forward.

Pick up of multiple myeloma, a type of blood cancer, is down by 14 per cent

He said: "Nearly two years into the pandemic, there is still a mountain of almost 50,000 people who are missing a cancer diagnosis.

"Cancer patients are stuck, waiting in a system that doesn't have the capacity to treat them fast enough, let alone deal with the backlog of thousands who have yet to come forward.

"It has never been more crucial to boost NHS capacity to treat and support everybody with cancer, so people receive the critical care they need now and in the years to come."

The charity says it is "deeply concerned" about how cancer services will cope when patients are eventually diagnosed.

Already there are signs that the "missing cases" are coming forward in droves.

An NHS spokesperson said: “Throughout the pandemic cancer has been a priority for the NHS, and diagnosis and treatment numbers have been back at pre-pandemic levels since the spring, with record numbers of people being referred for investigation over the last six months.

“NHS staff have consistently gone above and beyond to support and care for patients, with 95 per cent of people starting treatment for cancer during the pandemic doing so within 31 days.

"It is important to emphasise that the NHS remains open and ready to care for you, so it’s vitally important that people experiencing cancer symptoms come forward and get checked.”

If you have any of these symptoms it doesn't mean you necessarily have cancer of course. However, it may be a good idea to contact your GP. The signs are:

If you’ve been dieting or increased your exercise levels then you will naturally lose weight, but if you haven’t made any changes to your lifestyle and the weight continues to drop off this could be a warning sign of something more serious.

If you’ve been exercising yourself it’s normal to get out of breath, but if you notice yourself feeling more breathless than normal it’s best to consult your doctor.

3. A persistent cough or hoarseness

Coughs are mostly common and harmless, but if it continues for more than three weeks or gets worse, see your GP.

This could be caused by food poisoning or a stomach bug, but if you experience problems for 4-6 weeks or more, then tell your doctor.

Moles with an irregular shape or jagged edges should be checked by a GP. Also, if existing moles become bloody or secrete any liquid then that is worth checking.

6. Blood in your urine or faeces

Bleeding between periods is a fairly common side effect of the contraceptive pill. But bleeding from the vagina between periods, after sex or post-menopause should be checked out by your doctor.

Make sure you look out for unusual lump or swelling on the body. The best way to check for lumps in the breasts or testicles is to feel them in the shower.

The testicles should feel smooth, without any lumps or bumps, and firm but not hard.

The NHS Breast Screening Programme has produced a 5-point plan for being breast aware:

Look at your breasts and feel each breast and armpit, and up to your collarbone.

9. Sore that does not heal

An open wound that never heals is another possible sign of cancer. Each type of skin cancer can appear differently, so it is important to talk with your doctor when you notice a change in your skin.

Night sweats can be caused by temperature change or hormonal changes, but they can also be a sign of cancer.

They can be an early symptom of cancers including leukaemia, bone caner and liver cancer.

According to the survey of more than 1,700 people over the age of 50, more than 50% of people in the UK had experienced at least one of these symptoms, but only 2% thought cancer could be the cause.

The study, by Cancer Research, found that the majority of people were worried that there GP would think their complaint was trivial.

But catching cancer early can literally be the difference between life and death so if you’re worried, see your GP immediately.

Previous : Lukashenko tells migrants at Belarus-Poland border he won’t make them go home
Next : Drivers face £1,000 fine if they forget to update one detail on their licences