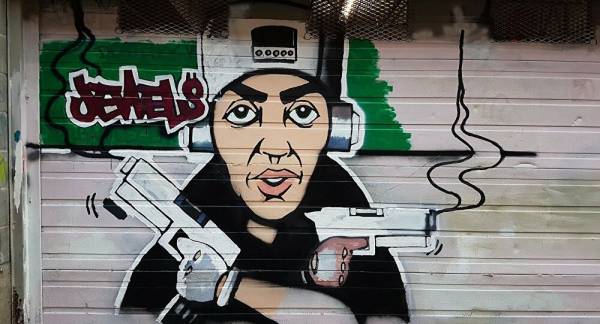 In July 2019 Craig Small, 32, was shot dead as he walked to a chicken shop in north-west London. He was better known as Smallz, a rapper affiliated to the Stonebridge Usual Suspects Gang.

UK rapper and grime artist Skrapz, who is accused of helping a gang murder a rapper in 2019, will have to wait until February 2022 for his trial.

Skrapz, 32, whose real name is Christopher Kyei, has been charged with perverting the course of justice and possession of ammunition – 10 rounds of 9mm bullets.

On Friday, 6 November, Kyei was due to be arraigned at the Old Bailey in London but the prison authorities at Wormwood Scrubs jail said the videolink had not been arranged. Kyei was not therefore able to be arraigned.

​Anthony Orchard QC, prosecuting, said he had been told by the Old Bailey’s listings office that the first date they could find for the trial was 21 February 2022.

Because of the coronavirus pandemic dozens defendants in England and Wales are being forced to wait much longer for their trials.

Courtney Ellis, 34, from Brentford, and Aaron Youngsam, 28, from Harlesden, are charged with the murder of Craig Small, who was gunned down in the Monks Park district of Wembley, north west London in July 2019.

Ellis is also accused of the attempted murder of another man, Serge Mukendi, a few minutes after Small was killed. Mr Mukendi only survived because the gun jammed.

Small, who lived on the notorious Stonebridge Park estate in Wembley, had appeared rapping on a video made by the Stonebridge Usual Suspects Gang (USG).

Nines is back, Skrapz is back , Ice City Boyz are back

​The USG are reportedly involved in a long-running feud with the Ice City Boyz, a hip hop collective with whom Skrapz is reportedly affiliated.

On Friday, a fourth man – Horaine Nicholas 29, from Wembley – appeared in the dock at the Old Bailey and was arraigned on a charged of perverting the course of justice by disposing of a blue Mini which had been used as the getaway car.

Nicholas pleaded not guilty and the case was adjourned for a plea and case management hearing next month.