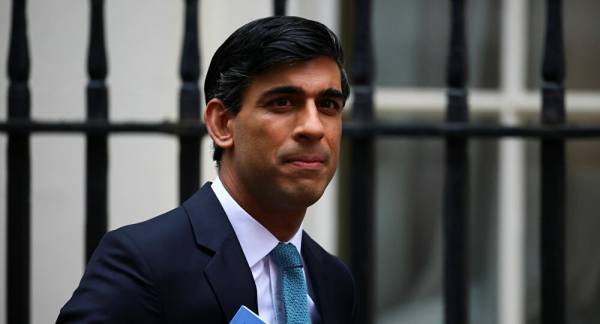 UK Chancellor Rishi Sunak said that with private sector pay falling amid the coronavirus pandemic and unemployment set to hit 2.6 million and public debt at almost £400 billion, he could not justify an across-the-board pay rise for all state employees.

Britain’s Chancellor of the Exchequer has announced a pay freeze for millions of public sector workers amid the ongoing COVID-19 pandemic, but spending boosts for infrastructure and research.

With government borrowing forecast to hit £394 billion ($525 billion) this year and a 11.3 percent slump in GDP, Rishi Sunak announced major cuts to foreign aid and a public sector pay freeze on Wednesday, excluding frontline health workers fighting the pandemic and the lowest-paid. There are some 5.4 million public sector workers in the UK, with 3.4 million of those working for the central government.

“Our health emergency is not yet over, and our economic emergency has only just begun”, Sunak told Parliament. “Our immediate priority is to protect people’s lives and livelihoods”.

He said public spending to tackle the coronavirus over the next year would total £55 billion, including £18 billion for vaccines and testing, £3 billion to help the NHS recover from the pandemic, funding a million checks and scans, and £3 billion to local government.

But the chancellor had bad news on the economic and employment fronts.

“Our economic output is not projected to return to pre-pandemic levels until the fourth quarter of 2022”, and government debt was forecast to rise to almost 100 percent of GDP by 2026, he said.

Unemployment is set to hit 7.5 percent – or 2.6 million people – next year he said, although it was predicted to fall after that as the economy recovered.

Sunak insisted the country had only weathered the pandemic as well as it had due to its low public borrowing, and the government had a  “responsibility” to return the economy to a stable state.

Noting that private sector wages fell by one percent while public sector salaries rose this year, Sunak insisted he could not “justify a significant across-the-board pay increase” for all state employees.

But he pledged a “pay rise to over a million nurses, doctors, and others in the NHS”, and that those earning under £24,000 per year would be guaranteed a pay rise of £250.

And Sunak said departmental spending would increase by 3.8 percent in real terms, with the core health budget increasing by £6.6 billion. And under the Barnett Formula for regional funding, Scotland would get an extra £2.4 billion with £1.3 billion for Wales and 0.9 billion for Northern Ireland.

The government will spend a whopping £100 billion on capital spending for infrastructure, Sunak said, £27 billion more “in real terms” than last year, including on new housing, fast broadband to 5 million business premises, and 4G connectivity. The chancellor also claimed that “we’re making this country a scientific superpower” with billions invested in research and development.

The chancellor additionally announced a new UK infrastructure bank headquartered in the north of England that will start work from next spring, while there would be a £4 billion “levelling-up fund” for neglected areas of the country which local authorities could bid for directly to fund projects.

Turning to international development, Sunak said spending 0.7 percent of Gross National Income (GNI) on overseas aid – the UN target – was “difficult to justify at a time of unprecedented crisis”.

The foreign aid budget will be cut to 0.5 percent of GNI, although Sunak stressed the UK would still be “the second-highest donor in the G7”. He pointed to Prime Minister Boris Johnson’s recent announcement of increased defence spending as an example of other ways the UK would continue to make its presence felt around the world.

Dave Prentis, general secretary of the nursing and municipal union UNISON, said more pay for his 1.3 million members would be spent on the local economy, and denounced Sunak’s spending plans and £250 rise for the lowest paid as “austerity plain and simple.”

“Going after the pay of millions will be a bitter pill for key workers getting the UK through the pandemic and out the other side,” Prentis said. “Extra money in pockets gets spent locally. Less than a pound more a week for some won’t save the thousands of ailing shops and leisure, arts and hospitality venues across the country.”

An the Royal College of Nursing’s Dame Donna Kinnair said the chancellor had missed the “opportunity to recognise and reward the expertise and dedication of UK nursing staff today” by failing to specify how much of a pay rise nurses and others would get.

“At a time when many experienced nurses are burnt out, exhausted and considering leaving the career they love, the link between unfair pay, staffing levels and safety becomes even more stark,” Kinnair said.

And in a clear threat of industrial action, she warned that nurses would oppose the pay freeze for equally “skilled professionals” in social care and the community.