UK at ‘Critical Point in Pandemic’, Top Epidemiologist to Warn Amid Talks on Tougher COVID Curbs 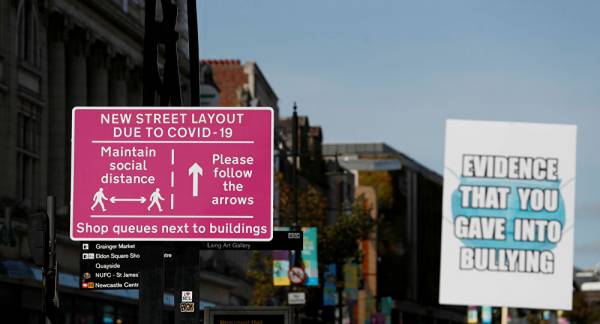 Whitehall is reportedly getting ready for a fresh round of healthcare restrictions, as British authorities grapple with a new spike in the rate of infections.

The UK is at a “critical point” in the coronavirus pandemic, the chief medical officer for England, Professor Chris Whitty, is expected to warn in an address to the nation on Monday morning as Prime Minister Boris Johnson is prepared to lay out a new roadmap to prevent a second wave of the coronavirus, according to a Daily Mail report.

The medical officer will tell a televised briefing that the country faces a “very challenging winter”, with the current trend heading in “the wrong direction”.

During his address, Professor Whitty, who will appear alongside the government’s chief scientific adviser Sir Patrick Vallance, will explain how the virus has been spreading across the country and the potential scenarios that could unfold as the cold season approaches.

They will dwell on the experience of other countries such as Spain and France, which are now dealing with a second spike, to conclude how the UK could effectively use their expertise.

The warning comes after Boris Johnson yesterday held talks with both Whitty and Vallance while reportedly drawing up a virus battle plan that could usher in another six months of lockdown restrictions across Britain.

It was meanwhile revealed that eateries and other public spots that allow big groups to gather but don’t duly collect customers’ details will be ordered to close at once.

Local authorities and the police will be encouraged to perform spot checks to ensure venues are meeting the regulations amid a rising number of COVID-19 cases.

Downing Street warned over the weekend that the country is “in the last chance saloon” with the prospect of more restrictive national measures, such as curfews.

Other potential measures include forcing bars and restaurants to shut their doors at 10 p.m. every night, as has already happened in places such as Bolton and Newcastle. There may also be a ban on rubbing shoulders with people from other households as a new epidemic threat has emerged.

The government is understood to be readying to launch a major campaign to enforce the rules that have been in place in recent months in a bid to have no need for further tougher restrictions.

“We will come down hard on people who do the wrong thing,” Health Secretary Matt Hancock warned, not ruling out a full-fledged second lockdown, as the government announced that anyone in England refusing to obey self-isolation orders could be fined for up to £10,000.

Prime Minister Johnson could reportedly voice a set of updated measures at a press conference as early as on Monday.

An unnamed senior government figure told The Times that while no final decision had been made by Johnson, the government would be looking over the next six months in what seems to be “a tough” plan.

“It’s not as simple as saying COVID is up and it’s a simple binary choice [over lockdown]. It is a very, very complicated picture that we need to look at over the next six months and that is going to be the tough part,” the source shared.

As of Sunday, another 3,899 cases of the coronavirus in the UK were confirmed, according to the national health authorities, while a further 18 people died within 28 days of testing positive, bringing the UK total to 41,777.