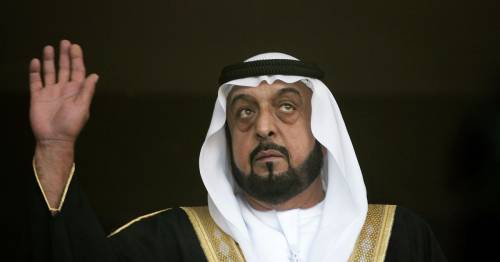 The longtime ruler of the United Arab Emirates has died after being in power for nearly two decades aged 73.

In 2016, Sheikh Khalifa was named in the Panama Papers – which was a massive leak revealing how the world's richest people protect their wealth through tax havens and shell companies.

It has been previously reported that Sheikh Khalifa owns £1.4billion in luxury properties in London through shell companies.

He owns a £400million yacht – that Azzam – which boasts of 50 suites, gym, pool. golf training room and can accommodate more than 100 people.

It was eclipsed in 2019 by just three metres by the research and expedition vessel REV Ocean.

The Burj Khalifa, the world's tallest building, was originally called the Burj Dubai but was renamed in his honour after Abu Dhabi helped pay £8.21billion of Dubai's debts.

He is expected to be succeeded as ruler of Abu Dhabi by his half-brother Crown Prince Sheikh Mohammed bin Zayed al-Nahyan.

Mohammed bin Zayed has been the de facto ruler of the UAE after Khalifa suffered a stroke in 2014.

This the Azzam – the superyacht owned by Sheikh Khalifa

Breaking the news, WAM agency tweeted: "The Ministry of Presidential Affairs announced that there will be 40 days of official mourning with flags at half-mast and three days closure of ministries and official entities at the federal and local levels and the private sector."

It is not clear what the cause of death was.