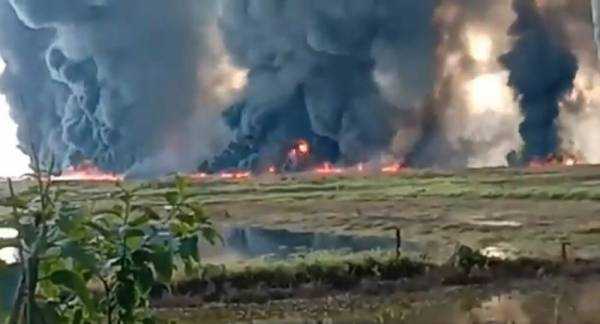 New Delhi (Sputnik): An Oil India Limited (OIL) rig in nothern India’s Assam caught fire on Tuesday following a huge explosion. The gases, which have been emanating from the well since 27 May, and fire have caused significant damage to a nearby eco-sensitive national park and wetland.

The bodies of two firefighters who went missing at a wetland near the site of a massive oil well fire in India’s Assam were recovered on Wednesday.

The wetland is located near the scene of the oil well fire in the state’s Baghjan Tinsukia area.

The blaze, which is till burning for a second day, has damaged several houses in the adjacent area. Local residents have stated on social media that the carcasses of endangered Gangetic dolphins and other aquatic life can be seen floating in the water of the national park.

The blaze from the rig can be seen from a distance of 30 km, Indian news agency PTI reported. Billowing smoke and fumes have become a hazard to local biodiversity, as it is located near the Maguri Mottapung wetland and Dibru Saikhowa National Park, it added.

The state government is receiving assistance from the Indian Air Force and Army in the firefighting operations, as the situation continues to remain grim despite efforts by the country’s National Disaster Response Force (NDRF). Around 2,500 people have been evacuated from adjoining villages and taken to relief camps by the NDRF.

Experts from the Singapore-based firm Alert Disaster Control, called to control the blowout and assess the situation, said it could take up to four weeks to totally cap the well.

The public sector company, OIL has also announced financial relief of INR 30,000 (about $397) for each of the affected families.