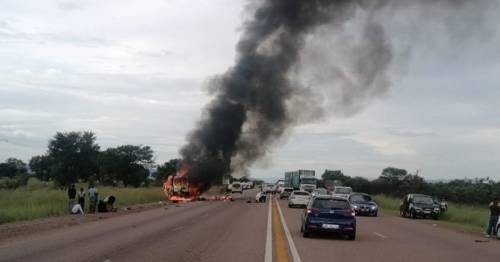 Twelve people have been killed and another eight have been injured after a horror head-on crash in South Africa.

The collision involved a 22-seater Iveco bus and a Toyota SUV on the N1 near Mookgophong, in Limpopo on Tuesday.

Images on social media show smoke billowing from one of the vehicles by the side of the dual carriageway where there was no central reservation.

The department of transport and community safety said the driver of the Toyota allegedly lost control due a burst tyre and hit the 22 seater Mercedes Benz bus, reported The Citizen.

It stated: “The bus burst into flames and eleven occupants trapped inside were burnt to death. The driver of the SUV was also killed on impact. Eight people survived, six are seriously injured and two escaped with minor injuries.

"Transport and Community Safety MEC Mavhungu Lerule-Ramakhanya has sent messages of condolences to the affected families and wish speedy recovery to the survivors.

"The MEC is once again pleading with Motorists to inspect their vehicles before they get into the road. She is concerned that most of the fatal accidents reported on the N1 have a common cause."

Hundreds of people wrote on Facebook of their sorrow for those involved and also questioning the safety on the road which has been the scene of many accidents.

One person wrote: "Concrete barriers are needed on that road stretch, not those useless plastics poles they put up there. Our people are dying because of poor road design. And we pay too much on toll gates, there's money to put barriers."

Another said: "This is hard. It's unacceptable. We loosing our loved ones on a daily basis."

And a further stated: "I was there, and it was heartbreaking to stand there and you can do absolutely nothing for those people."