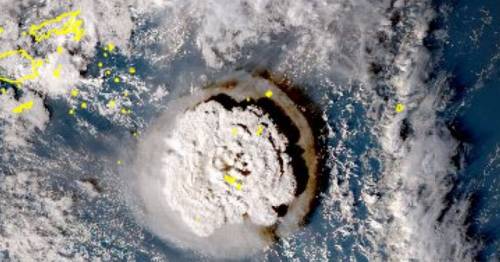 A tsunami with waves two feet high has hit American Samoa in the South Pacific and a warning has been issued in Tonga after an undersea volcano erupted.

The tsunami was observed by sea-level gauges at the capital of the US territory of American Samoa following volcanic activity in Tonga, the US-based Pacific tsunami warning centre said.

The tsunami threat continues and sea level fluctuations and strong ocean currents pose hazards along beaches in harbours, the tsunami monitor said in a statement.

A meteorologist claimed he'd never seen anything as frightening as the Tonga eruption, with reports of ash 'raining' from the sky, darkness, and 'booming sounds'.

A tsunami warning had been put in force for all of Tonga said the Tonga Meteorological Services.

Many shared worrying tweets following the tsunami, with one saying "booming sounds and tremors being felt in Fiji. Pray for Tonga."

Another said: "So the loud thud I heard was the volcano erupting in Tonga and not thunder. I live in Fiji. Stay safe Tonga."

One said it was "raining ash and tiny pebbles" with "darkness blanketing the sky."

An expert added: "As a meteorologist, I’ve seen many things on satellite. None as frightening as this Tonga volcanic eruption."

"It is literally dark in parts of Tonga and people are rushing to safety following the eruption," one tweet said.

"We expect New Zealand coastal areas on the north and east coast of the North Island and the Chatham Islands to experience strong and unusual currents and unpredictable surges at the shore."

Please check back regularly for updates on this developing story HERE.

Get email updates on the day’s biggest stories straight to your inbox by signing up for our newsletters.