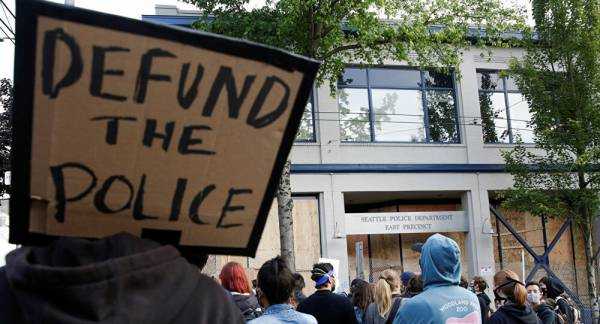 The option to terminate the police department is being considered in the wake of four of its officers being charged with murder and aiding and abetting murder over the killing of African-American George Floyd.

US President Donald Trump reposted a series of tweets and statements that condemn calls to “de-fund” American police – something that George Floyd protesters have been demanding recently.

Trump namely retweeted a mocking audio-recording pretending to show what a call to 911 in Minneapolis would look like if the city council implements its plan to disband the local police department and replaces it with vaguely described “community-based strategies”.

Trump also reposted a tweet by the editor-in-chief for The Daily Wire, Ben Shapiro, suggesting that Minneapolis residents will be asked to “check their privilege” when calling 911 to report a burglar in their own house. Shapiro’s tweet, in turn, mocked the response of Minneapolis City Council president Lisa Bender to a question from a CNN Anchor regarding what Minneapolis residents should do if a criminal broke into their house. Bender stated that such calls come “from a place of privilege” and suggested that sometimes calling police does more harm than not doing so.

On his Twitter page, Trump also recalled a statement by US Senator Bill Cassidy that “defunding police would be good for robbers and rapists”.

Prior Attempts in US to Dismantle PDs

It is so far unclear what the city of Minneapolis will replace the police department with after it gets disbanded. The practice of disbanding a PD is not entirely new for US cities, but none of these measures was ever taken in a city as big as Minneapolis.

Police departments have been closed in places such as the village of Deposit near New York, Garden City, Missouri, and the city of Rio Vista, California, mostly due to local governments being unable to afford them, with state or country sheriffs often taking over their jobs.

©
AP Photo / John MinchilloProtesters are arrested by NYPD officers on Park Avenue after violating curfew Friday, June 5, 2020, in New York. Demonstrations continued Friday following the death of George Floyd who died after being restrained by Minneapolis police officers on May 25

As the Minneapolis authorities mull disbanding its police, one less populated US city has already tested such a measure. The government of Camden, New Jersey, was forced to break up the local police department in 2012 due to rampant corruption in its midst and spiking crime rates as a result. However, a year later the city replaced it with Camden County Police Department, which rehired over 100 police officers from its predecessor.

The new department, however, adopted new guidelines in its work in an attempt to focus on “community-oriented policing” and non-violent resolutions of the city’s problems. The department has also been working hard to earn back the trust of the city’s residents, who feared law enforcement would revert back to the habits of the previous PD, which involved abusing their powers to plant evidence on suspects and fabricating reports.

While some of the residents still mistrust the local police, others reportedly have noticed some changes. The crime rates have also plunged to half the levels of 2012, but are still far from reaching zero and allowing the city to exist without any police presence.