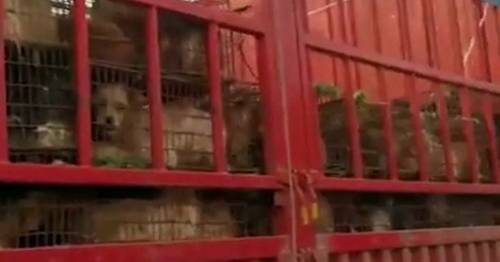 Hundreds of dogs set to be slaughtered have been saved by rescuers before arriving at Yulin's dog meat 'festival' in China.

Police worked with animal activists to intercept a truck with 386 distressed dogs onboard in the sweltering heat.

The truck with Yulin license plates was spotted on the highway approximately 500 miles from the city, crammed with small wire cages of dogs.

The activists have praised Shaanxi police for their swift response and said that if all police took this zero tolerance approach, China's brutal dog meat trade would come to an end.

The truck was stopped and all 386 dogs were confiscated
(

Sign to our TeamDogs newsletter for your weekly dose of dog news, pictures and stories.

"It was horrifying to see so many dogs in such an appalling state, it was like a truck from hell for these poor animals," Lin Xiong, one of the activists at the scene, said.

"They had probably been on the truck for days, dehydrated and starving, many of them with visible signs of injury and disease.

"We could see their petrified faces peering out from the cages and we knew those dogs were headed straight for Yulin slaughterhouses where they would have been bludgeoned to death.

"The Shaanxi police response was really impressive, they came out in force and pulled the truck over, taking the dogs under police control when the driver was unable to prove he'd acquired and transported them legally.

The animals are now under police control
(

Distressed dogs were cramped and starving
(

"It was a very tense time for us but thanks to the authorities, these dogs are now safe in police quarantine where they can get food, water and rest."

The Yulin gathering is largely fuelled by dog thieves, and many of the 386 dogs were still wearing their pet collars.

They were a mixture of breeds and many appeared to be in poor physical health with infected eyes and skin disease.

Almost 400 dogs have since been moved to a police quarantine facility for 21 days, where they will recover and receive veterinary care.

After this time, if the trafficker refuses to pay a hefty fine – which is likely the case – the dogs will be released to the activists.

A shelter supported by HSI and partner group Vshine has made itself available to take care of as many dogs as needed.

Many were still wearing pet collars
(

Vets are seeing to their urgent care
(

Dr Peter Li, China policy specialist for HSI, said: "Despite the fact that most people in China don't eat dogs, dog eating hotspots in the south such as Yulin do still exist and millions of dogs continue to suffer terribly.

"I'm so proud of the Chinese activists who are standing up for these animals, and the police whose response was absolutely vital, because without them these dogs would already be dead on the kill floor of a Yulin slaughterhouse."

The Yulin event starts on June 21 and can attracted thousands of visitors from across the province in southern China, who gather to eat dog meat stew and crispy dog meat at the city's restaurants and stalls.

Dog meat is currently banned in Hong Kong, Taiwan, Thailand, Singapore and the Philippines, as well as in the cities of Shenzhen and Zhuhai in mainland China, Siem Reap province in Cambodia, and in 17 cities and regencies in Indonesia.

An estimated 30 million dogs a year are still killed for meat in other parts of Asia.

Do you have a dog story to share? Email nia.dalton@reachplc.com.