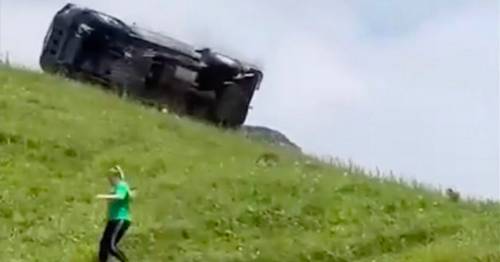 A dramatic video shows an out-of-control car career down a hill as tourists scramble to get out of its way.

A driver in a Nissan Patrol had driven up the steep grassy slope in the Caucasus Mountains as a woman is seen sitting on the grass calmly watching the drama unfold in Russia.

At first the joyrider reverses down but then he quickly loses control and the vehicle repeatedly turns on its side coming down Tyzyl gorge in the Kabardino-Balkaria republic.

The Nissan completes six full somersaults on the way down before coming precariously to a rest at the top of another steep slope.

Some reports say passengers are seen being thrown from the windows as it rolls down the mountainside, some 34 miles from regional capital Nalchik.

Another account disputes this and says the driver was alone in the stricken vehicle.

“The passengers got out before the climb.”

Two watching tourists – a man and a woman wearing green – run for their lives as the vehicle rolls ominously towards them.

Items are thrown through the open windows, and the SUV clearly suffers damage.

At least one person was in intensive care after the rollercoaster incident which was watched and filmed by other tourists.

Another video shows how the SUV was crumpled following the cascade.

“The driver did not have enough experience driving in extreme conditions on the mountain,” said an onlooker.

One source said: “I know the driver personally.

“He is alive and in one piece. He was very lucky, his arms and legs intact, a few bruises, he wasn't strapped in.

“He came round in the back seat.”

Last week a girl was killed and three teenagers rushed to hospital after a horror car crash in the US.

Suffolk County Police said two of the boys were seriously injured in the smash which saw the convertible ending up in the back court lawn of a home in Commack, Long Island, New York, in the US.

The four were in the car with its top down when the driver moved to avoid another car before losing control of the vehicle.

Dominic Crocitto, 17, was steering the Mustang which police say slid in to the lane opposite before it hit a Jeep going in he opposite direction.

The convertible turned over and landed on the back lawn of a home police say.

The 17-year-old girl Isabel Carella was pronounced dead at the accident location.

Crocitto and passenger Joseph Gibiino, 16, suffered serious injuries after being thrown from the open-topped vehicle

He was rushed in an ambulance to Stony Brook University Hospital and Gibiino was taken to Good Samaritan Hospital Medical Center.