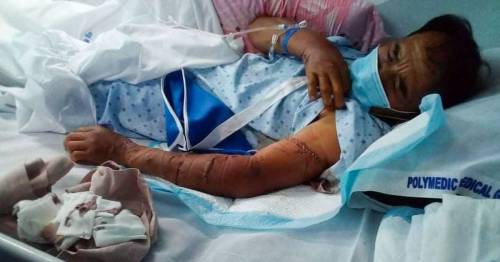 A tourist was savagely attacked by a crocodile after mistaking it for a plastic model when trying to take a selfie with it.

Nehemias Chipada, 68, spotted the beast while he was visiting the Amaya View amusement park in Cagayan de Oro City, the Philippines, on November 10.

He was with his family celebrating his birthday when he climbed into the pool to take a selfie with what he thought was a life-like model of the cold-blooded predator.

The 12-foot long croc lunged at his arm and dragged him in the water in front of his terrified family.

Harrowing footage shows Nehemias screaming for help as the croc sinks its teeth into this left arm.

Nehemias Chipada, 68, was bitten by a crocodile while at an amusement park with his family
(

He managed to break away and run off with his arm still intact.

Nehemias survived the attack as his family blamed the amusement park for not putting up signs warning them to stay away from the deadly reptile.

Mercy Joy Chipada, Nehemias's daughter, said: "There were no advisories warning us not to enter the enclosure. Because if there were, we would never have gone there."

Resort staff tightly wound handkerchiefs around Nehemias's arms and hands to stop the bleeding, before he was rushed to Northern Mindanao Medical Centre for treatment.

Examinations found he had sustained fractured bones and eight wounds that needed stitching on his left arm and thigh.

A three-inch crocodile fang had also been lodged in his flesh from the force of the bite. Multiple surgeries were needed to fix his broken bones.

Onlooker Rogelio Pamisa Antiga who filmed the shocking scene said: "I was looking at the lovely scenery around the park when the incident happened.

"I heard people screaming for help and saw the crocodile manhandling the old man. I thought it would bite off his arm.

"I wanted to help him, but I was scared and had no knowledge of how to deal with a crocodile attack."

The amusement park agreed to cover the costs of Nehemias' treatment but denied that they were negligent in warning tourists about the dangerous animals.

Amaya View Chief Operating Officer Candy Unabia said: "We deny the allegation that we have been negligent.

"They said they thought the crocodile was also artificial, but that area is actually restricted. There are signages and constant reminders from our tour guides."