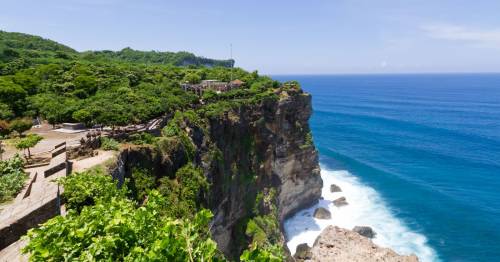 A tourist has fallen more than 160ft while trying to pose for a selfie on a bridge on the holiday island of Bali.

The 35-year-old holidaymaker sustained multiple injuries and is in intensive care after witnesses say he lost his footing before falling.

A local resident spotted an unattended motorcycle with its engine running close to the bridge at around 6pm and alerted the emergency services.

Personnel from the local police, the public order office, the military, lifeguards and local residents were all involved in the rescue effort, which was close to the popular Mamo Suluban Bridge in Pecatu Village, Uluwata on Saturday evening.

Denpasar Search and Rescue Agency Head Gede Darmada said: "We immediately dispatched our team there and we located the victim’s body at the bottom of the cliff.

The man was rescued after falling off a bridge
(

Image:
The man was rescued after falling off a bridge)

“The rescue operation took around two hours, due to the terrain and victim's condition.

"Our initial guess is that the victim fell off the bridge after taking a selfie.

"This is because many other travellers did so on the bridge, usually in the afternoon [for the sunset]."

Mr Darmada added: “If he directly crashed into the bottom of the cliff, [there would be a] slim chance that he would survive."

The rescue effort took two hours to pull the Canadian man to safety, due to the complexity of his injuries and the difficulty navigating the terrain in the dark.

The victim was rushed to Bali Jimbaran Hospital where he remains in intensive care.

The man has been named locally as Sadri Alesasandro Haidar, his current condition has not been released.

Uluwata is popular with tourists due to its clifftop location and beautiful beaches. It is abut 45 minutes drive from the Denpasar International Airport.

Previous : Woman ‘raped over 1,000 times’ as a child faces attacker in court after ‘nightmare’ – World News
Next : Prison guard’s romance with 6ft9 killer – from jail escape to car chase tragedy