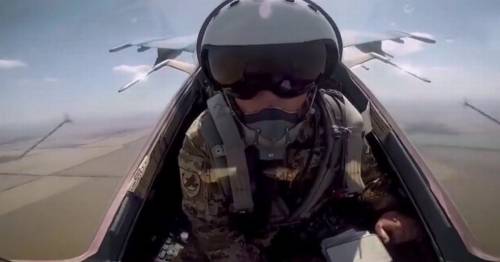 A gripping new video shows a Ukrainian jet firing missiles and doing elaborate barrel rolls amid the ongoing war between Ukraine and Russia.

The minute-long cockpit clip, which was shared on Twitter, shows the pilot performing nerve-racking manoeuvres in a mid-air show of force.

The Ministry of Defence of Ukraine – who shared the footage – captured the moment a pilot is seen climbing into an MIG-29 fighter jet before taking off from an airfield under Ukrainian control.

Defence experts then confirmed the jet took off from Voznesensk, in Mykolaiv Oblast, a reserve base used by the Ukrainian Air Force.

Geolocating software captured the pilot then flying over several towns and villages near the reserve base used by the Ukrainian Air Force before the clip cuts to a view of the top of the cockpit as the pilot launches a plethora of missiles.

The Russia-Ukraine war is now entering its fourth month

Commenting on the clip, the Ukrainian Defence Ministry said: "Dear World, look at how beautiful our land is. Is it any wonder that our pilots defend it with such courage and passion?".

Yesterday (June 20), more dramatic footage was obtained of a Russian pilot crashing into flames when a combat-tested Ukrainian soldier shot down his helicopter.

The Top Gun-like video – which was shared by Ukrainians – shows the moment a low-flying Mi-35M chopper is struck down by a shoulder-launched rocket.

An orange flash appears, and the aircraft cartwheels into a fireball as it flies down to a nearby field seconds later. Pictures of the aftermath show the wreckage to the £30million attack.

This time, a Soviet-designed Su-25 fighter jet can be seen flying over a road over the eastern Donbas region as the pilot's radar starts flashing – warning him of an imminent Russian attack on his plane.

In a feat of strength, the pilot starts twisting and turning in a bid to escape the hit, performing a series of different and challenging manoeuvres at high speed.

At some point, he gets dangerously close to the ground with the wing's of his aircraft, slightly grazing the trees below him.

But, this is not the first time either Ukrainian or Russian pilots have faced attacks.

With the Russia-Ukraine war now entering its fourth month, the Russian Air Force has so far struggled to win control over Ukrainian skies.

Despite its estimated 4,000 combat aircraft and vast experience bombing targets in wars and combat zones in Syria, Georgia and Chechnya, Russia has failed to gain air supremacy.

The Ukrainian Air Force has so far managed to grow their offensive air capabilities and adapted their air operations to retaliate on Russian attacks.

Meanwhile, Russian President Vladimir Putin has bragged that a new hypersonic nuclear missile is just months away from being ready.

The SARMAT missile, branded the Satan-2 in the West, is thought to be one of the most powerful nuclear weapons at the despot's disposal.