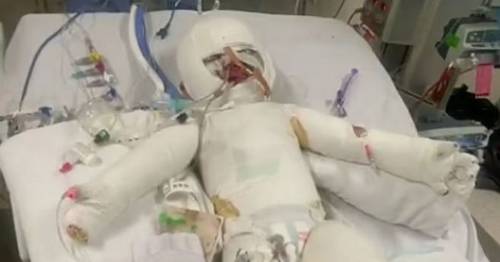 A young boy is fighting for his life after getting horrifying burns covering 40 per cent of his body in a house fire.

Two-year-old Elijah was fast asleep at his home in Mildura, Australia on May 1 when a raging fire broke out.

His heroic mum pulled her toddler son from the flames, but he has been left with horrific burns.

The blaze started just after 3.30am in the laundry of the home. Firefighters who rushed to the scene believe it was caused by the tumble dryer catching fire.

The young boy's room was engulfed with flames but his mother pulled him from the danger as the family escaped.

After being airlifted to Melbourne Royal Children's Hospital, Elijah was placed into an induced coma.

Pictures show his tiny body all wrapped in bandages in his hospital bed.

He is currently in critical condition in the intensive care unit, where it is believed he will have to stay for months.

Alyia set up a Go Fund Me page for her young brother, where she is asking for donations for her "energetic, loving" brother.

His heroic mum pulled her toddler son from the flames, but he has sadly been left with horrific burns
(

Explaining more in the fundraiser, Alyia wrote: "Elijah was put into a induce coma the night he was flown to Melbourne Royal Children’s Hospital, when he arrived he was rushed in for a Wound Debridement and has undergone several surgeries/procedures to stabilise him since then and will be a ongoing process for several months. Elijah is considered a trauma patient and we have been told that it is only the beginning of his journey to recovery.

"As it is still early days into his recovery we ask if Elijah could be kept in your thoughts and prayers.

"We would greatly appreciate any form of donation to help with Elijah's medical bills and his recovery including physical and emotional rehabilitation."

Alyia added: "The focus right now is getting him through the process and hoping for the best.

"It's definitely a miracle. He is a strong fighter. It's amazing to see how much he's already fought through this."