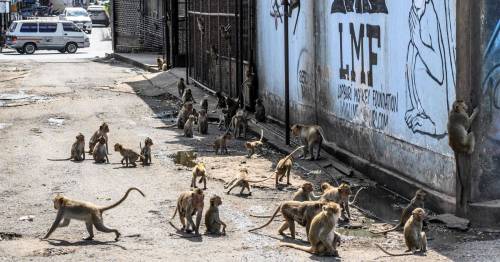 Gangs of wild monkeys are running amok through a town in Thailand, after reportedly becoming addicted to sugary drinks and sweet snacks.

Residents in the tourist hotspot Lapburi live their lives around the vicious macaques, which have set up their headquarters in a disused cinema.

The town, around 90 miles north of the capital

, is well-known for its monkey population which attracts tourists from around the world.

Despite the primates regularly creating havoc for locals and visitors, locals even hold an annual festival to honour the animals.

But according to Daily Mail reports , Lopburi’s monkeys, which multiplied in numbers during the pandemic, have recently enjoyed much greater access to sugar-filled snacks and drinks.

Monkeys jump on tourists during the Lopburi Monkey Festival
(

The streets of the city have become flooded by thousands of the sugar-fuelled animals, who compete violently for food and territory.

A video captured on Tuesday shows dozens of monkeys roaming the streets, jumping on cars, climbing on humans and even stealing their food and belongings.

Locals can be seen handing out plastic tubes filled with syrup and sugar, which the monkeys suck dry before grabbing bananas from another man.

The marsupials have been known to terrorise humans
(

The animals exhibit a complete lack of fear for humans which means they exhibit extremely bold behaviour – clambering across the windshields of moving vehicles and jumping over bystanders in the street.

According to locals, there are even rival gangs of monkeys which clash upon marking their territory.

The population of the wild monkeys has doubled over recent years, leaving locals struggling to reclaim their streets.

Back in 2020 police officer Nirad Pholngeun this week told the Deccan Herald that trying to disperse large groups was "hopeless".

He said: “Within a blink of an eye there are more monkeys. So many babies.”

As a result of their unhealthy diet, the urban monkeys have less muscle than wild macaques, with many suffering from hypertension and blood disease.

Narongporn Doodduem, the director of a regional office of the Wildlife Conservation Department, said: “The monkeys are never hungry, just like children who eat too much KFC.”

Longtail macaques gathering along a street in the town of Lopburi
(

The macaques are laying their dead to rest in a projection room as locals struggle to come up with a plan to reclaim the streets.

Many have been forced to barricade themselves at home as the monkeys take over the streets.

It has been reported that parts of the city have become no-go areas, and the monkeys have made a nuisance of themselves by tearing through shops and businesses, leaving a trail of destruction in their wake.

However, while locals may feel the city would benefit from fewer of the primates, some have admitted they would miss them if they totally disappeared.

Shop owner Taweesak Srisaguan said: "I'm used to seeing them walking around, playing on the street."

"If they're all gone, I'd definitely be lonely."