The Pandemic Comes to Yemen 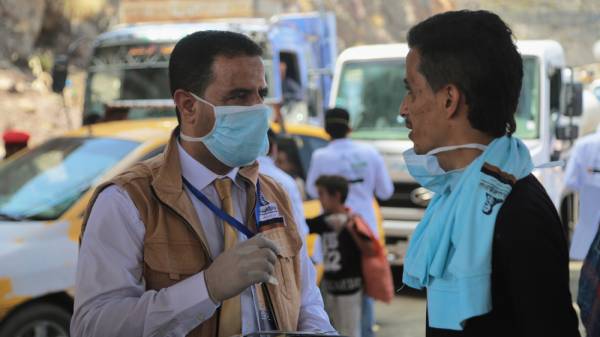 Yemen was already the world’s worst humanitarian crisis for the last five years, and the arrival of coronavirus could make it much worse in the next few months.

The country has already been devastated by five years of war, pestilence, and famine, and last week there was a report of the first confirmed case of coronavirus there. Last month, the Trump administration had impeccably bad timing in suspending aid shipments to Houthi-controlled parts of the country because of Houthi interference with the delivery of aid. The humanitarian relief organization Oxfam warned that this suspension of aid comes at exactly the wrong time, and it leaves an already terribly weakened Yemen even more vulnerable to the ravages of the pandemic:

In a country with millions of people forced from their homes living in cramped, unsafe conditions, stopping the spread of COVID-19 in Yemen will require a massive, collaborative effort.

In contrast to USAID’s broad-brush funding cutoff, most organizations and donors are supporting a joint effort led by the United Nations to achieve the same improvements in conditions for humanitarian assistance. The UN approach is centered on clear preconditions for aid delivery and the possibility of more targeted suspensions of programs that cannot be carried out effectively.

Still, Democratic lawmakers Eliot Engel and Adam Smith, who chair the House foreign affairs and armed services committees respectively, warned that the cutbacks during the Covid-19 pandemic would deepen the suffering in Yemen.

“A suspension of assistance during a pandemic would risk the health response in a country in which at least 50 percent of its healthcare is offline due to fighting,” they wrote in a letter to US Secretary of State Mike Pompeo and USAID administrator Mark Green.

“This certainly and needlessly leads to more lives lost.”

The suspension of U.S. funding for humanitarian assistance will undermine the life-saving work that is being done by humanitarian organizations. Many clinics that serve the hardest-hit civilians will be forced to close without U.S. funds. After five years of unstinting support for the Saudi coalition’s war, the least that the U.S. can do is to continue funding these essential services to protect civilian lives. USAID has said that there will be exceptions allowed for the most critical operations, but in a country suffering from so many overlapping disasters all humanitarian relief efforts are critically important.

The spread of coronavirus has caught almost every country off guard, but Yemen is at the greatest risk because of the damage that has already been done to the country’s infrastructure and the population by five years of the U.S.-backed Saudi coalition’s bombing, blockade, and economic war. Only half of the country’s health care facilities are still functioning, and the rest have been badly damaged or destroyed by bombing and shelling. What remains of the health care system is already taxed beyond its limits by the spread of preventable diseases, including cholera and diphtheria, and that makes the arrival of coronavirus in the country especially alarming.

As horrible as conditions in Yemen already are, this would be an even worse nightmare. “We have been saying since the declaration of the pandemic that the introduction of such a case in Yemen would be catastrophic,” said Altaf Musani, representative of the World Health Organization in Yemen.

Yemen is unusually vulnerable to a rapid spread of coronavirus, according to a new report by two humanitarian relief NGOs:

“Despite precautions issued by Yemeni national authorities and WHO [the World Health Organization] to minimise the risk of the virus transmission, there is a high risk that COVID-19 spreads rapidly throughout Yemen,” according to a risk report published this week by ACAPS, a nonprofit project of the Norwegian Refugee Council and Save the Children that publishes forecasts on the world’s most vulnerable communities.

The U.N.’s humanitarian coordinator, Lisa Grande, summed up the threat to the civilian population. “For weeks we have feared this, and now it’s happened. After five years of war, people across the country have some of the lowest levels of immunity and highest levels of acute vulnerability in the world,” she said.

The situation is made more unmanageable by the cut in aid funding. NPR reports:

The faint silver lining to this terrible news is that the pandemic has convinced at least some of the belligerents in the war to halt their campaigns for the time being. The U.N. Secretary-General has spoken about the need for a global ceasefire in response to the pandemic, and the U.N. special envoy to Yemen, Martin Griffiths, was pressing all parties to the conflict for a ceasefire. There is not yet a formally agreed ceasefire in place in Yemen. There was an encouraging sign last week when the Saudi coalition announced that they were stopping their campaign for two weeks.

Ceasefires in Yemen have usually not lasted long, but if all parties to the war abided by one this time that would give the people of Yemen some chance of facing this new threat without war. The Houthis are demanding the coalition lift the onerous blockade restrictions that have contributed so much to the humanitarian disaster in the country. If the Saudi coalition is serious about forging a truce, they should agree to this condition. Easing economic restrictions will not only assist in combating the pandemic, but it will also provide desperately needed relief for the vast majority of the population that still lives in Houthi-controlled territory.

A cessation of hostilities will be important for allowing all sides in the war to focus on slowing the spread of the virus, but Yemen’s population has been so battered by starvation and disease that they will need much greater outside assistance to help them through this latest crisis. Many of the simplest things that we rely on to prevent the spread of the virus, such as frequent hand-washing and basic sanitation, are difficult or impossible in a country where up to 18 million people lack access to clean water and millions are displaced from their homes. The country’s health care system is in ruins, and even more than most other countries Yemen lacks the testing capabilities, protective equipment, and ventilators that they will likely need in the months to come.

Save the Children’s Xavier Joubert recently listed what Yemen’s hospitals and clinics have at their disposal, noting, “there are 700 intensive care unit beds, including 60 for children, and 500 ventilators for a population of about 30 million.”

As Oxfam’s Scott Paul warned last month, “It will require a sweeping effort – with extraordinary international support – to limit its damage.” The people of Yemen are suffering from so many other outbreaks of disease that it makes it harder to know how widespread the coronavirus outbreak already is:

Hadramawt recently witnessed an outbreak of dengue fever, with hundreds of cases filling the public hospital of al-Shahr, where the coronavirus case was detected.

In Yemen’s under-equipped and barely functioning health system, it’s hard to distinguish among different viral diseases. Some of the symptoms of dengue fever are similar to the ones in COVID-19, the illness caused by the coronavirus, including muscle aches, fever and difficulty breathing.

“That makes it very difficult to say whether or not coronavirus has already spread in Yemen,” said Yousra Semmache, advocacy director for Save the Children.

At a time when so many other countries are struggling with their own public health crises, Yemen’s multiple disasters are even more likely to be overlooked than before, but this is the time when international support for Yemen’s civilian population is more important than ever. That it has taken a global pandemic to force the warring parties to see reason is deplorable, when Yemen has been in dire need of peace for years. There were many opportunities to bring this war to a close, and the people of Yemen will suffer even more from the latest outbreak because those opportunities were squandered.

The best and easiest thing in the near term that the U.S. can do is restore all funding for humanitarian assistance, and our government should bring pressure to bear on the Saudi coalition to ease the restrictions that have been strangling Yemen for years. Our government’s support for this war helped to cast the people of Yemen into the abyss, and we must do whatever we can to help them stave off this latest calamity.

Daniel Larison is a senior editor at TAC, where he also keeps a solo blog. He has been published in the New York Times Book Review, Dallas Morning News, World Politics Review, Politico Magazine, Orthodox Life, Front Porch Republic, The American Scene, and Culture11, and was a columnist for The Week. He holds a PhD in history from the University of Chicago, and resides in Lancaster, PA. Follow him on Twitter.

Previous : What if the Coronavirus Really Did Originate in a Chinese Lab?
Next : The Authoritarian Bug in China’s COVID Response