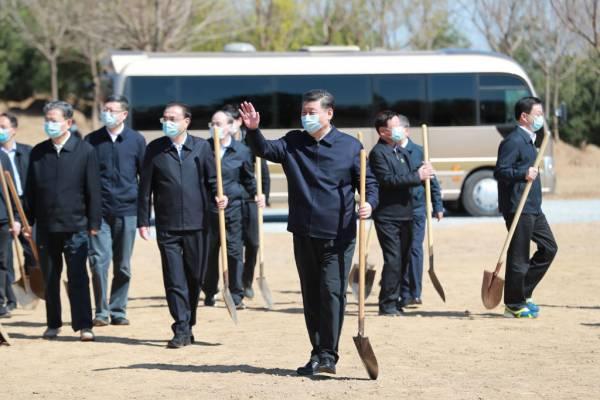 So much time under quarantine, so many things to do with it. There’s the mandatory throwing of half-empty takeout containers at the television every time the word “hydroxychloroquine” is uttered. There’s the calling of the police on your neighbors whenever they dare to coexist within two rooms of each other. And if you’re a celebrity, there’s the recording of worthless YouTube anthems about how everyone needs to stay inside, which for you means a six-acre marble palace, and not go to work, which for much of the country isn’t an option.

So yes, hard times all around. Camus, as I’ve previously noted, thought people tended to form new habits during times of crisis, though it sometimes seems like we’re inaugurating a whole new civic religion, complete with its own sins and sacrificial rites. Still, much remains the same. Bigotry is ever with us, and has lately been directed at Chinese Americans. The hysterical left is still with us, too, and its response to that discrimination has as usual been to attack a fly with a Stinger missile. When Utah State Representative Kim Coleman last month had the nerve to post on Twitter that “The Chinese government’s utter contempt for transparency led to this crisis,” she was pilloried as a racist. Samantha Bee, meanwhile, decreed that “tying coronavirus to China and Chinese people isn’t just a racist dog whistle, it’s a whole racist orchestra.”

More bloodcurdling, of course, is the sound of Bee’s show, which as always is trying to silence essential lines of inquiry in the name of intellectually constipated identity politics. That happens to be the kind of censorial tactic beloved by the Chinese regime. And so once again do our partisans blur together in these illiberal times. But if we’re going to blame someone for this flare-up of Sinophobia, then I have a suggestion: the Chinese government. Consider. There are many vicious anti-Asian stereotypes out there: they’re shifty, they’re dishonest, they’re brutal, they’re focused on commerce at the expense of all else. The Chinese government is all of these things. This isn’t because they’re Asian or because such crudities have any validity, but because they subscribe to a dehumanizing authoritarianism.

Now their dishonesty and malfeasance have had global consequences. There’s little question that China’s lies have helped enable the coronavirus’s spread. America’s intelligence agencies have concluded as much, saying Beijing undercounted both the numbers of cases and deaths, according to Bloomberg News. Those unreliable figures were then parroted by the infinitely gullible World Health Organization, which used them to inform its own data and recommendations. Chinese doctors who early on tried to sound the alarm were punished. Macabre corroborations of their warnings have since surfaced: pallets of cremation urns, Wuhan incinerators working overtime, funeral payouts to purchase silence. One study from the University of Southampton found that 86 percent of global coronavirus cases could have been prevented had China intervened two weeks earlier than it did; if they’d acted three weeks earlier, it was 95 percent of cases.

It’s one thing to flub a deadly outbreak and turn it into a global killer. (We all get a mulligan on that, right?) But Beijing has been here before. China’s coronavirus response is eerily similar to its reaction to the SARS outbreak back in 2003. Back then, it took them four months to admit that they had a problem and even longer to confess to its scope. All the hallmarks were in place: government falsification, economic fears trumping medical ones, doctors and health workers trying to get the message out, lowballed statistics. This led The Economist to run what might be the most immortal headline in its history and which I’m currently embroidering onto a living room sampler: “China: Please Lie Less.”

For a while, after SARS, it looked like Beijing might take that sage advice. The Chinese government actually admitted it made mistakes during the 2003 outbreak, sacked its health minister, and made it known that underreporting wouldn’t be tolerated. Everyone promptly breathed a sigh of relief. A new era of Chinese transparency was declared. Backs were patted into scoliosis; a seventh round of Davos caviar was ordered. Still, there were signs of trouble. For one, China had a law on the books, ratified in 1996, that classified all “highest level infectious diseases” as “highly secret.” For another, in 2007, Beijing barred a surgeon who had told the truth about SARS from accepting an award in America. For a third, that same year, China was responsible for yet another health scare, as millions of Chinese-manufactured toys were recalled after it was discovered they were covered in lead paint. Beijing supposedly banned lead paint in its American exports after that, only for even more toys to be called back a decade later.

Now we have the novel coronavirus. The root problem here is that China aspires to be a first-world country yet many of its standards and institutions still languish in the second world at best. Its authoritarian government has attempted to bridge this gap, flexing its muscles to accelerate economic development and conceal whatever adverse consequences might arise. This is similar to how the Soviet Union functioned, which is why this present crisis has shades of Chernobyl (there was nothing sane about the coronavirus). Just as the USSR discovered that the usual autocratic methods couldn’t contain the meltdown at Pripyat, so too can the Chinese playbook not keep a lid on the figurative fallout from COVID-19. It doesn’t matter that the Chinese regime is more powerful under Xi Jinping than it was in 2003 under Hu Jintao. There are some things the fog of war can’t conceal. When a crisis goes global, when tens of thousands of people die, other nations start asking questions. And often that means a reckoning is in order.

There’s a notion in play right now that authoritarian governments are more efficient than liberal ones. Democracy might turn every citizen into a squawking chick, but autocracy keeps the volk in line. Thus did Thomas Friedman pine for America to be China for a day, so a caste of benevolent technocrats could circumvent legal procedure and start solving the problems he wants addressed. (It’s an unconscionable idea, given that it would further the relevance of Thomas Friedman.) And there may be something to the trains-run-on-time mystique—it’s certainly true that during a crisis government needs to play a bigger role than it would normally. But we forget that authoritarian regimes come with gaping pitfalls all their own. They fall victim to the knowledge problem, trying to manage vast systems about which they don’t have enough information to control. They inevitably make enemies out of dissenters. They conflate their own self-interest with the common good. They grow paranoid, obsessed with their short-term survival. Robbed of external domestic criticism, they don’t learn from their mistakes.

All of this has been on display in China’s response to the coronavirus. It’s past time we started asking why we’ve ceded to such a place so many of our supply lines and so much of our debt. One Chinese doctor commented during the SARS outbreak: “You foreigners value each person’s life more than we do because you have fewer people in your countries. Our primary concern is social stability, and if a few people’s deaths are kept secret, it’s worth it to keep things stable.” That’s what’s backfiring on Beijing now; it’s also why we’d be wise to make sure our own civic religion avoids an authoritarian lurch. It’s a fine thing that we live in a country where we can research alternate cures, weigh the data, question the official response. Yes, that can get messy. But would we really want it any other way?

Matt Purple is a senior editor at The American Conservative.

Previous : The Pandemic Comes to Yemen
Next : Will a New Great Depression Dictate Trump’s Fate?