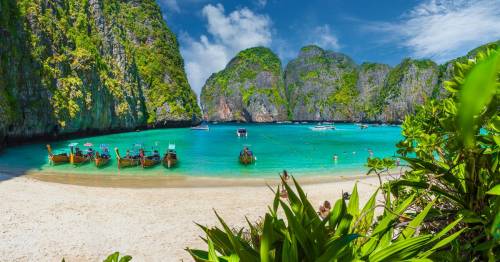 Maya Bay was once only known to a handful of backpackers who sought it out as an escape from the ­ tourist trail.

But due to the success of Hollywood film, The Beach, starring Leonardo DiCaprio in 2000, based on the novel of the same name by British writer Alex Garland, this picturesque Thai spot came close to ruin.

Now after three years of closure, imposed in an effort to save its coral reefs from tour boats and rubbish, Thailand’s most famous beach on the island of Koh Phi Phi is set to reopen on January 1.

After the film’s release, about 5,000 visitors came daily to the beach, which is 250 yards long, 15 yards wide, and accessible only by boat.

It was due to close for just four months, but the period was extended to allow the coral reefs to recover from damage.

As well as replanting coral, efforts have been made to prevent erosion by replanting trees and grass along the beach.

Leonardo DiCaprio starred in The Beach, filmed on Maya Bay
(

Thon Thamrongnawasawat, a marine biologist at Kasetsart University in Bangkok, said that he believed the waters were improving as a result of a booming shark population.

Only 300 tourists will be allowed on the island at one time for a maximum of an hour between 10am and 4pm. They will be ferried to a single pier away from the beach.

More than half of the world’s coral reefs have been lost in the past two decades and more than 90% are expected to die by 2050.

Reefs are among the world’s most productive and diverse ecosystems, sustaining about 25% of all marine life, including more than 4,000 species of fish.

They first emerged 500 million years ago but they take at least 10 years to recover after they have suffered bleaching by warmer waters.