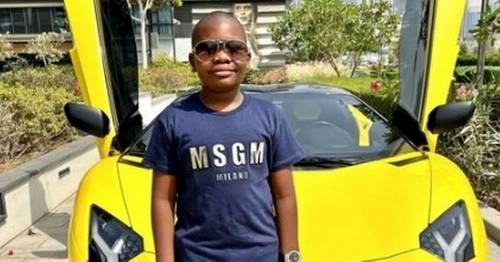 Ten-year-old who is ‘Africa’s richest kid’ gets £300,000 Lamborghini for birthday – World News

A 10-year-old boy who is Africa's richest received a £300,000 Lamborghini for his birthday.

Muhammed Awal Mustapha,who is known as Mompha Junior on social networking site Instagram, hit his landmark age last month and took to social media to show off his new yellow supercar on Wednesday.

The £300,000 Lamborghini Aventador is one of the latest images in his page where he is seen wearing top of the range clothes and flying in a private jet.

Ismailia Mustapha (Mompha Senior), shared the original snap of Mohammed wearing bright yellow laces on his shoes to match the Lamborghini behind him.

The Daily Star reports his multi-millionaire dad wrote beneath the photo for his 1.2 million followers: "Having a Son like you is the very reason to look forward to life.

Muhammed Awal Mustapha shows off his blingtastic lifestyle to his 25,000 followers on Instagram
(

"Your smile is also the reason for our constant Happiness We love you!!!

Fans rushed to share their congratulations to the young man.

Elsewhere on the page another said: "Happy birthday youngest millionaire."

Mompha Junior has enjoyed the the high life at a young age and shared an image saying: "I'm back."

Junior,who, reportedly already owns a fleet of supercars and a collection of mansions, also wrote: "Zooooo."

His father's staggering wealth stems from being the CEO of Mompha Burea De Change, Lagos Island.

He often shares images online of the luxurious lifestyle he can afford.

He has seen social media followers spiral since sharing a snap of his new Rolls Royce in February 2018.

Ismailia Mustapha shows off his supercars, private jets, and luxury mansions which are based around the world including in Dubai and Nigeria.

He is seen handling lots of money which keeps his followers hooked and lets them know he's extremely rich.

His son's Instagram account takes a leaf out of his dad's book whose page he could soon eclipse.

The 10-year-old's page is covered in pictures of supercars, cash and clothes and the designers he wears wears aren't cheap.

His father once wrote about Mompha junior: "The youngest landlord who wears Gucci and still owns a house.

"He deserves some accolades cos he has paid his dues in full."

Previous : Vladimir Putin’s lookalikes ‘ready to step in if tyrant has cancer surgery’ – World News
Next : Russian ‘Z-tank graveyard’ as 52 blown up in one battle with Putin forced into retreat – World News