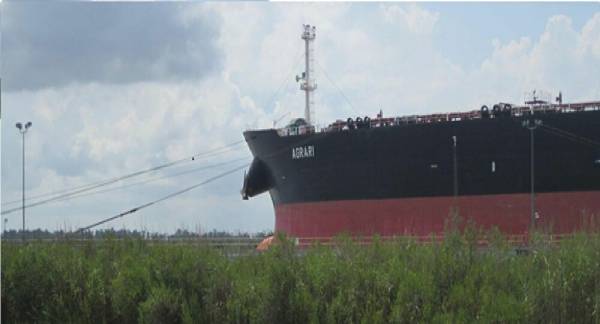 In 2019, at least six tankers suffered non-critical damage to their hulls as a result of explosions of unknown origin while sailing through the Gulf of Oman. Although an investigation into one of the incidents by the UAE concluded that it had been carried out by a state actor, it fell short of naming which one.

The Saudi-led coalition waging a military operation in Yemen stated that a commercial vessel had sustained minor damage from “shrapnel” due to a foiled terrorist attack, the Al-Arabiya TV channel reported. According to officials, the attempted attack was carried out by Yemen’s Houthis using an explosive-laden boat.

Coalition forces successfully intercepted the boat, but it still managed to damage the ship in the process. Officials accused the Houthis of endangering navigation in the region and blamed Iran for purportedly supporting the group’s efforts. In the past, Tehran has strongly denied accusations of supplying Houthi militants with weapons.

In a separate statement, the UK Royal Navy’s Maritime Trade Operations (UKMTO) has reported that a vessel suffered an explosion at Shuqaiq in Saudi Arabia while it was operating at an oil plant located there. The port is located near the northern border of Yemen, which has been ravaged by an internal conflict for five years, often spilling over into the territory of the kingdom.

The Greece-based firm TMS Tankers later confirmed that its MT Agrari tanker had suffered a blast one metre above the waterline, tearing a hole in its hull. The explosion, however, did not result in injuries among the crew or an oil spill. The company said it is unaware of the origins of the explosion and is conducting an investigation into the incident.

The UK maritime security company Ambrey, in turn, suggested that the oil tanker had suffered from a mine explosion. The company did not reveal the source of its information.

“The Agrari was struck about 1 meter above the waterline and has suffered a breach. It has been confirmed that the crew are safe and there have been no injuries”, Ambrey said in its report.

The explosion that damaged the MT Agrari and the foiled attack come hot on heels of a series of other Houthi attacks targeting Saudi oil facilities. The militants, who have been fighting the Saudi-led coalition in Yemen since 2015, successfully struck a petroleum products distribution plant in Saudi Jeddah with a cruise missile on 23 November. Two weeks ago, the Houthis also successfully targeted a floating platform belonging to a Saudi oil company, causing a fire at the installation.

At the same time, the Saudi-led coalition reported on 24 November that it had successfully destroyed several naval mines planted by the Houthis in the southern part of the Red Sea.

In May and June last year, at least six tankers were damaged in a series of blasts in the Gulf of Oman, resulting in damages to the vessels. A UAE investigation into the May attack concluded with the government saying that only a state actor could have conducted such an attack, but stopped short of naming one. The US, in turn, accused Iran of orchestrating the attacks, without providing solid evidence to prove it. Iran strongly denied involvement in the attack and proposed that regional countries assemble a force to ensure maritime security in the Gulf, but it never received support.

Previous : ‘Mood Hoovers’ Attack Boris Johnson After He Tells Boy Santa Has Not Cancelled Christmas
Next : Making History: BTS Becomes the First K-Pop Band to Ever Be Nominated for a Grammy