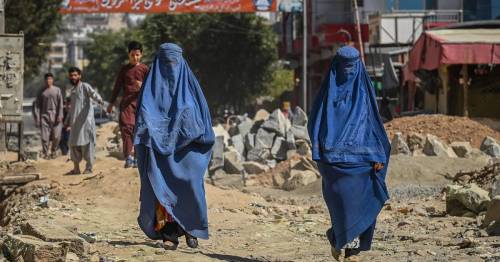 The Taliban will once again force Afghan women to wear the head-to-toe burkha in another U-turn on promises to reform women's rights in the country.

The sharia state's supreme leader today ordered women to cover their faces while out in public.

It is the most-recent escalation of restrictions against women in public spaces that has sparked backlash from the international community and from sections of the Afghan public.

The group's supreme leader Hibatullah Akhundzada has issued a decree explaining how a woman's dad or closest male relative will be visited by the Taliban if a female family member is found to be outside her home without a veil.

If the woman is a repeat offender and continues to leave home uncovered, her male relation could be imprisoned or fired from a government job.

And the Taliban's ideal covering is the blue burkha, a spokesman for the Ministry for the Propagation of Virtue and the Prevention of Vice told a press conference in Kabul.

The blue burkha – which covers every inch of a woman's body from head-to-toe – became a global symbol of the Taliban's brutal 1996-2001 regime.

Under the new decree, male relatives of women caught with their faces unveiled could face harsh punishments
(

Most women in Afghanistan wear a headscarf for religious reasons, but many in urban areas such as Kabul do not cover their faces.

The group has faced intense pushback, led by Western governments but joined by some religious scholars and Islamic countries for their growing limits on women's rights.

A surprise U-turn in March in which the group shuttered girls' high schools on the morning they were due to open drew the ire of the international community and prompted the United States to cancel planned meetings on easing country's financial crisis.

Some of the young girls were seen returning home from school in tears after the Taliban reversed the decision.

Officials claimed they sent the girls home because it hadn't been decided which school uniforms the children should wear.

The inconsolable girls wearing their school uniform left their school grounds sobbing after being turned away and told to go straight home.

A teacher at a girls’ school in Kabul, was quoted by Aljazeera saying: “I see my students crying and reluctant to leave classes. It is very painful to see your students crying.”

Washington and other nations have cut development aid and enforced strict sanctions on the banking system, since the Taliban took over in August, pushing the country towards economic ruin.

The Taliban has said it has changed since it last ruled when it banned girls' education or women leaving the house without a male relative and women were required to wear cover their faces.

However in recent months the administration has increased its restrictions on women including rules limiting their travel without a male chaperone and banning men and women from visiting parks at the same time.