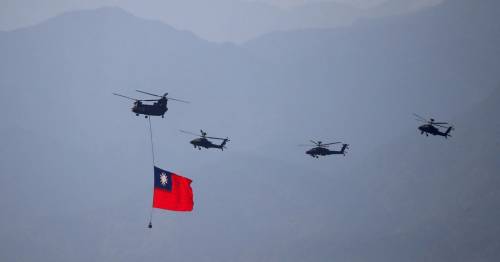 Tension between Taiwan and China has reached boiling point amid warnings a full scale invasion could take place by 2025.

On October 10, Taiwan celebrated its National Day, just as it has done on the 10th day of the 10th month every year for the last 110 years to commemorate the Wuchang uprising which brought an end to the final imperial dynasty.

However, this year was a somewhat more fraught affair as it fell amidst ongoing escalations of tensions with mainland China.

The National Day came amid heightened aggression and rhetoric from both sides, with China flying war planes too close what Taiwan perceives to be its airspace.

The situation is a product of over a century if history that incorporates the Chinese Civil War, World War Two and the overthrowing of Imperial China.

What has led to the current situation?

The self-ruled island of Taiwan, also known as the Republic of China (ROC), that exists today formed in 1949 when the government that once ruled the entire nation fled there following the Civil War with the Chinese Communist Party (CCP) which now rules over the neighbouring mainland, or People's Republic of China (PRC).

Beijing demands ownership of Taiwan, an island 112 miles off China’s east coast which broke away from the communist mainland in 1949
(

Taiwan's National Day was full of reminders about the history of the two governments and both sides' longstanding disagreements over the sovereignty of the island.

What is going on now?

In the capital Taipei, during her address to the nation Taiwan's president Tsai Ing-wen vowed to bolster the island's military defences, saying its future: "must be decided in accordance with the will of the Taiwanese people."

Her comments were made in response to Chinese president Xi Jinping's statement that the PRC is committed to peaceful unification with Taiwan, something it has said in the past it would be prepared to do by force.

China's Taiwan Affairs office said on Sunday that Tsai's speech flared tensions and that Taiwan's quest for independence would eventually close the door on the potential for discussion between the parties, Al Jazeera reported.

In Taiwanese airspace 10 days earlier, on the PRC's own National Day, no fewer than 38 PRC planes, including military bombers and fighters, reportedly flew through the island's self proclaimed Air Defence Identification Zone (ADIZ).

It was the year's highest daily number at that point, sparking fears that China's resolve to claim what it regards as a breakaway province is getting stronger.

Over the course of that weekend the PRC flew some 150 planes through the ADIZ.

What are leaders saying about the situation?

Now, with tensions the highest they've been for decades, leaders around the world have begun to spell out the magnitude of the situation.

Last week, Taiwan's defence minister told the China Times that he believed China would be ready to launch a full scale invasion of the island in three years' time.

Meanwhile Mr Xi said: "Taiwan’s independence separatism is the biggest obstacle to achieving the reunification of the motherland, and the most serious hidden danger to national rejuvenation."

The Wall Street Journal reported that small numbers of US troops had been sent to help train Taiwanese forces, with the US pledging to defend Taiwan and its independence.

On October 6, US secretary of state Anthony Blinken called on China to halt its "provocative" actions near Taiwan.

However, US president Joe Biden said he and Mr Xi had agreed to abide by the "Taiwan Agreement", which formally recognised China rather than Taiwan while still allowing for a working relationship with the island.

Previous : Drag queen hit with ‘urine’ thrown from car terrified to walk outside alone
Next : Factbox: What’s in the EU plan for future Britain-to-N.Ireland trade?