Swedish Model: Deaths From COVID-19 Will Be Far Fewer Than Deaths Caused by Ruined Economy – Prof 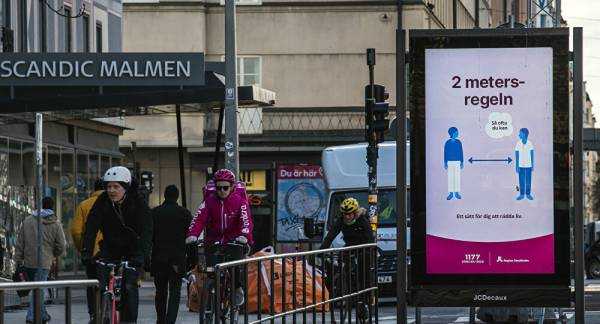 Unlike its European neighbours Sweden has not opted for a strict COVID lockdown: and although all public gatherings of more than 50 people are banned and people are largely encouraged to stay home, restaurants and bars are open and children are still attending schools. Swedish academics have weighed up the pros and the cons of Stockholm’s model.

Despite opting for flexible quarantine measures Sweden has been trailing far behind Spain, Italy and the UK in terms of confirmed COVID-19 cases and related deaths with just 23,216 infected and 2,854 fatalities. However, at the same time, the Nordic country has substantially outpaced its neighbours, Denmark, Norway and Finland which account for 503, 214 and 246 fatalities, respectively. Whether or not Stockholm’s health strategy has worked will be seen in coming months, say Swedish observers.

“I think it will prove to be a good strategy in the long run”, says Peter Nilsson, a professor of internal medicine and epidemiology at Lund University.

He notes that the Swedish “flexible restrictive strategy” allowed the country to keep the economy afloat and avoid a spike in unemployment rates.

In addition, one of the consequences of the strategy is herd immunity, Nilsson stresses, adding that the second and, possibly, the third wave of COVID-19 will become the litmus test for the approaches adopted by Sweden and other countries.

The idea of herd immunity has been repeatedly voiced by Anders Tegnell, epidemiologist with the Swedish Public Health Agency and the country’s COVID strategy architect. However, the World Health Organisation (WHO) warned in an April statement that there is “no evidence that people who have recovered from COVID-19 and have antibodies are protected from a second infection”.

Nevertheless, Swedish academics admit that the country’s death toll is higher than that in neighbouring Nordic states. What’s worse, the pandemic has found its way to the homes for elderly, they note.

A very large number of deaths in care homes has triggered a lot of criticism towards the strategy, points out Paul Franks, a professor in genetic epidemiology at Lund University.

The other problem is that Sweden has failed to shield its vulnerable ethnic minorities from the pandemic, he says.

In April the Swedish Public Health Agency underscored that the country’s large immigrant groups had a higher risk of being hit by COVID-19 than compared to ethnical Swedes. “Among the Somalis the risk is almost five times higher than compared to people born in Sweden,” admitted Swedish state epidemiologist Anders Tegnell on 14 April as cited by EuroObserver.

‘We Have to Wait & See How It Will Play Out’

In mid-April a group of 22 scientists from top Swedish universities and research institutes wrote an open letter in the Dagens Nyheter criticising the Public Health Agency for its ‘deeply flawed’ approach and urged the government to revise the strategy as Sweden’s COVID death toll reached 1,000 people.

There is a mix of factors that point to success and some that point to a failure, but that is a fair price, according to Paul Franks.

“Let’s say on face value, you can say – the strategy in Sweden hasn’t worked because we had many more deaths than any other countries”, he says. “However, to maintain a lockdown, you know, until a vaccine is available – people generally accept that it is unrealistic. So, most countries are trying to reopen their societies. Sweden does not have to reopen its society now. It has to maintain what it’s been doing already. Which is possible. It could be done”.

Despite mounting criticism from many countries the world “now seems more positive to the Swedish strategy since there is a big pressure to reopen societies”, observes Mikael Rostila.

He refutes the idea that the Swedish model can be adopted by any country: “Swedes have high trust in the state institutions and politicians which has been shown in many surveys”, the professor says. “Therefore Sweden can have a different strategy which is based on belief that citizens will follow the advice given by the government and public health agency without bans or laws”.

“It remains to be seen if the Swedish strategy is the most successful”, Rostila stresses.

Previous : Bill Gates and His ‘War Against Cash’ Are a Threat to Our Liberty, Economist Warns
Next : Tweeps Praise Israeli High Court’s Decision to Greenlight Netanyahu-Gantz Pact