Sweden’s Semi-Lockdown: A Middle Way That Won’t Crash Their Economy 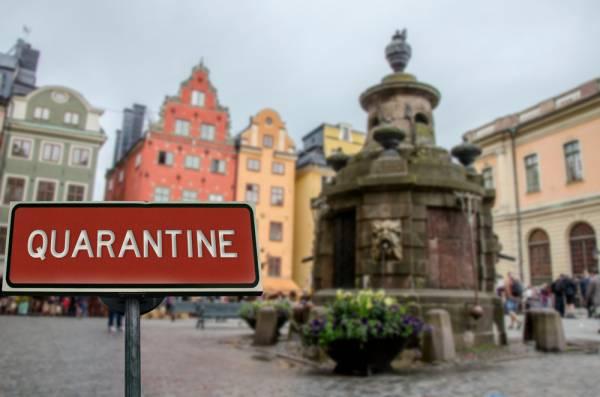 Scandinavia has more to offer than beautiful people, epic poems, and gorgeous scenery. It could be key to figuring out proper responses to the threat posed by COVID-19, and a comparison between the three countries could support the idea that disease reduction doesn’t demand draconian laws that implode economies.

It’s simply accepted by statistical modelers, the media, and the politicians who declare war against the coronavirus that lockdowns to maximize “social distancing” are highly effective. Yet it’s incontrovertible that these actions often impose tremendous hardship now, which portends greater hardship later as the world spirals into a deep recession, or even another Great Depression.

In fact there is no war, the enemy is a piece of mindless DNA, and there’s precious little evidence to support the necessity of enforced social distancing beyond 1) Hermits don’t get contagious diseases, and 2) Any time a country hits peak cases and infections recede, the public health community and the media give credit to government measures that preceded it. This is merely the fallacy of post hoc, ergo propter hoc; after this therefore because of it. We may as well blame Kobe Bryant’s death on Donald Trump’s election.

Norway and Sweden share a common thousand-mile border, and along with Denmark have languages similar enough that they can understand each other without benefit of Pimsleur courses. For a long period Sweden and Norway were united under one kingdom, while for a much longer period Denmark and Norway were united under a dual monarchy. Vikings came from all three countries. All three remain constitutional monarchies and they’re genetically extremely similar.

But when it comes to COVID-19, we see dramatic differences in government actions. Simply put: The Swedish Chef is still in business while his Norwegian and Danish counterparts are unemployed. “Börk börk börk”! And yet, the Swedes have by far the lowest case rate of the three.

“While Denmark and Norway closed their borders, restaurants and ski slopes and told all students to stay home this month, Sweden shut only its high schools and colleges, kept its preschools, grade schools, pubs, restaurants and borders open — and put no limits on the slopes,” reportedThe New York Times.

Norway doesn’t just suggest. Fines of about $2,000 USD and 15-day jail terms await scofflaws. Sweden did put a limit on social gatherings – first at 500 people, then at 50, which is about 49 more people than many other countries allow.

For its efforts, Norway has been widely praised, while Sweden is scolded as the fiddling while Stockholm burns. “Doesn’t Sweden Take the Coronavirus Seriously?” asked the headline in the Danish newspaper Politiken.

But Norway is being economically punished, as unemployment has suddenly soared to its highest level in 80 years. (Danish and Swedish unemployment data are lagging but we can presume that Denmark is also being slammed while Sweden is better off but still suffering because of dependence on foreign economies including its immediate neighbors.)

Swedish historian Lars Tragardh told The New York Times his government feels it doesn’t “need to micromanage or control behavior at a detailed level through prohibitions or threat of sanctions or fines or imprisonment.” That, he said, “is how Sweden stands apart, even from Denmark and Norway.”

“The strategy in Sweden is to focus on social distancing among the known risk groups, like the elderly. We try to use evidence-based measurements,” Emma Frans, doctor in epidemiology at the famed Karolinska Institute, told Euronews. “We try to adjust everyday life. The Swedish plan is to implement measurements that you can practice for a long time,” she said.

The Norwegian model, along with the Danish one, appears more based on “erring on the side of caution” or perhaps the proverbial swatting of a fly with a hammer. So how is it working?

So far there has been no peak in any of the three countries. But Swedish cases, according to Worldometer, are little more than half those of Norway: 714 per million versus 1062. Denmark has a rate of 808, better than Norway but still worse than “fiddling” Sweden. Indeed, Sweden has one of the lowest rates in Europe. For all the financial and emotional suffering and a worldwide rise in authoritarianism, cui bono?

Deaths per case are not relevant here, reflecting mostly the quality of health care systems, and on that metric Sweden is somewhat higher. Thus Sweden is considering tightening restrictions because of the death rate and outside criticism, but that’s actually an admission that, though they have relatively few cases, they’re not handling them particularly well. Meanwhile, Denmark has announced it’s reducing restrictions notwithstanding that spread is still significant.

In any event, the total lockdowns are unsustainable and everyone, including the Scandinavians, knows it.

“It’s difficult to keep the world locked down, until we have a vaccine launched in 18 months,” top Danish economist Lars Christensen told Euronews, while adding in Norse fashion that he didn’t necessarily oppose his government’s policy.

To be sure, despite the numerous similarities between these countries there could be various factors at play that are difficult to account for. But we should also consider the success of a vastly different culture on the other side of the world, that of South Korea, where the epidemic peaked in just two weeks. That country early on made targeted efforts such as contact tracing, rather than “democratizing” the epidemic, as in, “If anybody suffers; we all suffer!”

Moreover, seemingly every epidemiologist who gets quoted or published regarding the coronavirus ignores the most basic rule in epidemiology called Farr’s Law (dating to 1840 and before any public health organizations), that says epidemics peak and decline on their own. That’s not to say that proper actions cannot reduce overall infections – or improper ones increase them. During bubonic plague outbreaks people sometimes blamed and killed cats – that of course were actually beneficial in controlling plague-spreading rats. There’s a lesson there.

Both Farr’s Law and the Scandinavian experience show it may not be necessary to destroy the world economy to save the world. Further, we’ve long known that “wealth equals health,” and not just between nations such as the U.S. and Bangladesh but within countries as well. Health is a commodity just like automobiles and toasters. Therefore, a deep world recession or depression is probably going to do some serious killing long after COVID-19 fades into the background.

But aside from a few countries, we’ve seen too little balancing. Instead it seems fanaticism has reigned—a tunnel vision focused on combating this disease through coercive means, at the cost of untold economic devastation and ruined lives.

Michael Fumento is an attorney, author, and journalist who has been writing about epidemic hysterias for 35 years. He can be reached at [email protected]

Previous : European virus tracing apps highlight battle for privacy
Next : Paranoia about cheating is making online education terrible for everyone